Including Sports in the Israel Trip

When your school is planning an Israel trip, I highly recommend scheduling a time to go to a game, meet with some of the wonderful athletes, the fans, and the media. Or visit a training facility, pick up the newspaper, and have an expert in Israeli sports give your students a fun educational talk before going to a match. They will gain a greater appreciation for Israel and the fabric of this ever evolving nation.

As Jews, we are proud of the fact that we can compete with the best just as in any other field, whether high tech, literature or architecture. We beam with pride when we see one of our own go to the highest of levels, and we feel a sense of belonging. Their accomplishments inspire us and provide us with role models. Sports are one of the greatest examples of a field that can impact Jews across the world.

In Israel, sports such as soccer, basketball or Olympic sports bring people young and old together. Omri Casspi, an Israeli basketball player currently with the Sacramento Kings, is one of the best-known Jewish athletes of our generation; he gives both children and adults in Israel and around the world a sense of passion and pride. Casspi is just one of thousands of Israelis who play professional sports in competitive leagues in cities all over the country.

Israel and sports have united Jews time and time again. The terror at the 1972 Munich Olympic Games brought together Jews from around the world in support of those Israeli athletes who were taken as hostages and ultimately murdered. The first Olympic medal won by Yael Arad in the Barcelona games of 1992 excited Jews around the globe to celebrate the accomplishment. This year, Maccabi Tel Aviv Football (soccer) Club represented Israel in the European UEFA Champions League, and Maccabi Tel Aviv Basketball Club won its 6th European Championship in May of 2014.

I’ve attended over 2,000 live sporting events in person, beginning as a three-year old going with my parents to a Montreal Expos doubleheader against the Chicago Cubs (and not making it past the 3rd inning of game 1, from what I’m told). I’ve held season tickets for the New York Yankees, Rangers, Knicks, Jets, Liberty, St. John's, CityHawks, and Metrostars, all at the same time. Throw in world class boxing, tennis, NASCAR, Formula One, and watching soccer in countries such as Italy, Switzerland, Portugal, Spain, the Czech Republic and Malta—nothing compares to going to a soccer or basketball game in Israel. Hands down, Israel is the ultimate destination for any Jewish sports fan.

The two main sports in Israel are soccer, which is called on this side of the Atlantic Ocean “football,” and basketball. Israel boasts a top tier football league, with 14 teams in cities as far north as Kiryat Shemona and as far south as Beer Sheva in the desert. Haifa has two clubs while Tel Aviv has three, and of course there’s also a team in Jerusalem. There are other leagues below the Premier League or Ligat Ha’Al; minor league teams populate cities and towns all over the country.

Maccabi Tel Aviv soccer and basketball teams are the most decorated, having won the league title and the Israel State Cup (a knockout competition) over 20 times a piece. Other popular clubs include Hapoel Tel Aviv, Maccabi Haifa, Hapoel Beer Sheva and Beitar Jerusalem. Most teams bear the name Hapoel or Maccabi, as the teams themselves were founded by sports clubs bearing those names. Hapoel began in 1926 during the British Mandate of Palestine and identified with the workers union, while Maccabi was founded in 1895 in the city of Constantinople. The fan base of the clubs has changed over the years, yet the roots are still strongly entrenched within the populations that started them.

Teams in the soccer league are limited to only five foreign players, while all of the others must be Israelis. This policy nurtures homegrown talent and gives the feel of a truly Israeli product. The purpose of foreign players is to help upgrade the level of play on the teams and in essence aid in the development of the local players, giving the Israeli fans the quality they are looking for.

The basketball league also limits the amount of foreign players; at all times there need to be three Israelis on the court, again helping the Israeli players grow. You will see some clubs sporting American players with dual citizenship, and those do not count against the foreign limit rule.

Over the last number of years, Israel has invested in its sports infrastructure, especially in the building of soccer stadiums, allowing the spectators a more enjoyable experience. A state-of-the-art 30,000 seat facility opened last year in Haifa, while new stadiums in Petach Tikva, Netanya, Akko and Beer Sheva all seat between 4,000-17,000 fans. Just as the world’s Jews have invested in other Israeli industries, they have done so in the field of sports. Maccabi Tel Aviv Football Club was purchased by Mitch Goldhar, a sports fan from Toronto who was responsible for bringing Walmart north of the border. Maccabi Haifa is owned by Floridian Jeff Rosen, and there have been other investors from outside of Israel continuing to help grow the sports landscape in the Holy Land.

One of the greatest experiences you can have in Israel is walking into a packed new arena with over 11,000 people strong in either Jerusalem or Tel Aviv and sing Hatikvah before a game begins. Seeing the beautiful Israeli blue and white flag flying on the massive screen and hearing the passion of all the fans singing Israel’s National Anthem proudly at the top of their lungs is something that can’t be matched anywhere else.

If 11,000 is not enough for you, then try a soccer game at the 30,000 seat Sammy Ofer Stadium in Haifa with acoustics that can’t be duplicated. Hearing all of the announcements in Hebrew and the crowd chanting songs for the players in Hebrew, the language taught in Jewish day schools worldwide comes alive in a totally different and unique way.

The Israel Football League (IFL) and Israel Baseball Association (IBA) strengthen the bond between olim and native Israelis. Both leagues provide people who have grown up with these sports the opportunity to continue playing them and pass on that love to their own children, friends, classmates and relatives.

Just as there are sports sections in the New York Post or the Chicago Tribune, Yediot Achronot has its own section in Hebrew covering Israeli sports and the world’s most important leagues. This is yet another way to turn students on to Israel and create a bond and a love for the Holy Land.

Sitting in the stands with your fellow Jews provides an opportunity to share something that everyone has in common—the love of sports, the love of competition and sportsmanship—while meeting and sharing stories with your Israeli brothers and sisters. You can all wear shirts and jerseys emblazoned with a team’s logo in Hebrew, the names on the back of the shirts in Hebrew, or with a team scarf. Those souvenirs will follow the students back to their homes and communities; their friends and neighbors will be eager to hear the background story behind them. How about yelling after a goal or or basket with everyone around you? Yet another educational moment that will stay with the student.

In your schools, Israeli sporting events offer a totally different way of introducing and learning about Israel, its society and culture. Use the sports section as a way to make learning modern Hebrew fun. There are numerous Israeli sports websites in Hebrew and my website (SportsRabbi.com) in English to provide up-to-date information on the sports scene in Israel. Begin to think outside of the box the next time you are in Israel, and give the students an unforgettable way to love our homeland. 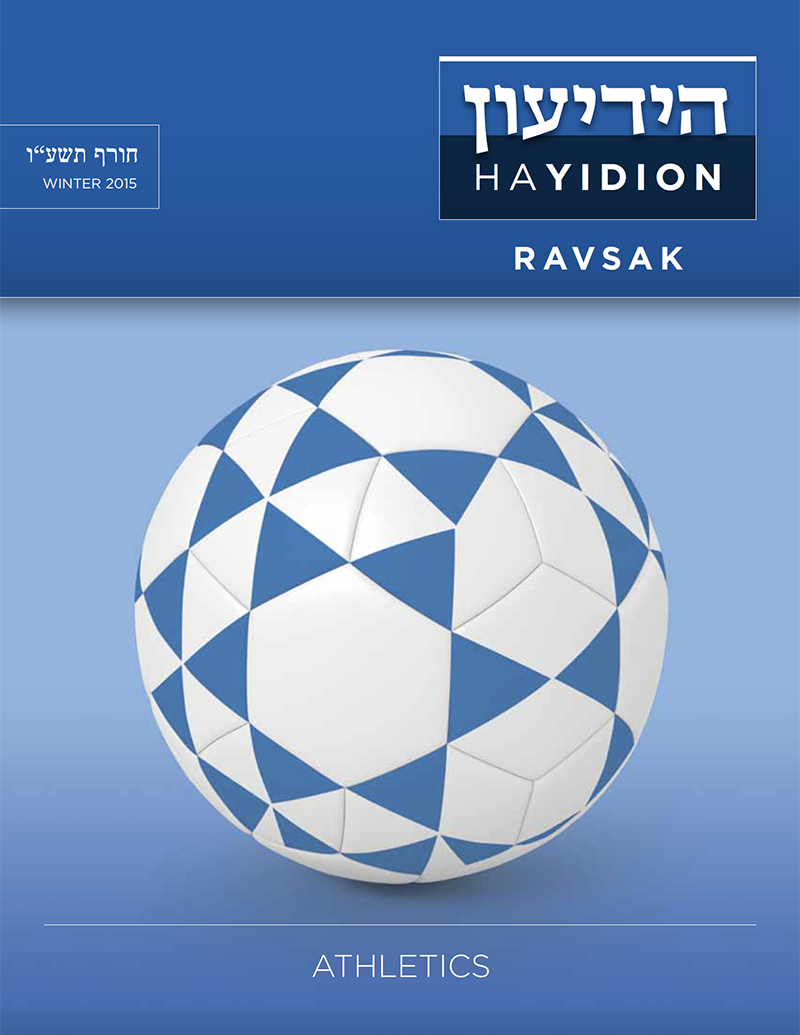