When We Agree and When We Argue: How Does Dialogue Deepen Learning Among Colleagues?

When we carve out time for professional learning, teachers are often most eager to get the chance just to talk together. Many participants in professional development retreats and conferences name conversation with colleagues as the most valuable part of their learning process. As one high school teacher in a fellowship program put it, she looked forward each month to the opportunity to be in discussion with her cohort, whether it was for getting their support, their praise or their guidance. Participants deepened their learning both when conversations surfaced disagreements and when discussions highlighted areas of agreement.

In this article, drawn from my work with Israel educators, I identify and describe two types of collegial dialogue: dialogues of agreement and dialogues of disagreement. Each can contribute productively to individual and group learning in their own ways. Dialogues of agreement, where we speak to others with whom we share ideas, can reinforce our core beliefs and assumptions while adding greater nuance to them. Dialogues of disagreement, on the other hand, can build empathy and understanding of the perspective of others, in addition to helping us investigate and interrogate our own beliefs.

Teachers crave the opportunity to speak and work with those they see as allies and peers. As one teacher explained, “What I desire right now is to work with people who are, I guess, like-minded and functioning in a way that we ‘get’ each other and we could really work together.” The chance to speak with colleagues who “get” you offers much appreciated comfort and affirmation along with new insights about that shared work. When we hear our ideas described by a colleague with whom we feel aligned, it can help us see our work with new eyes.

Dialogues that offer the opportunity to agree with colleagues provide a way for participants to feel seen and heard. Hearing how others see the world and describe it can offer new language for previously unarticulated assumptions. In one discussion, a participant was describing his approach to teaching, and another burst in, “I think you just articulated my philosophy of teaching Israel education! It is what I’m doing. I’m passionate about that!” She was energized because, while she felt strongly about these ideas and had been enacting them in her classroom already, she had not identified it fully as a coherent, recognizable “philosophy” until articulated by someone else.

A middle school teacher also shared her experience of the energy that comes from a sense of agreement in a dialogue when she reflected on her experience talking about an integrated curriculum project that another teacher had presented to the group. She had begun to work with colleagues at her own school to integrate Israel education into other courses, but it was a change she considered both significant and risky. After the discussion, she commented, “It was in the back of my mind all year, but then when he brought it, it’s just like, ‘Wow, that’s good. We really need to push for it.’ It gave us another shove towards the right direction.”

For each of these teachers, being in dialogue with like-minded colleagues was a supportive and energizing experience. It helped them each deepen their professional learning, guiding one to articulate a philosophy in a way that could lead to more focused pedagogical choices, and propelling another towards bold curricular changes she had been hesitating to make.

Speaking with teachers whose ideas of curriculum or pedagogy clash with ours is more challenging. At first glance, it may seem not only unwelcome but unwise to urge teachers to engage in conversations that are deeply uncomfortable and may result in hurt feelings. But dialogues of disagreement can be productively unsettling rather than just upsetting.

Discomfort can promote learning in a variety of ways. A dialogue of disagreement can serve to build empathy for positions held by others. Alternatively, such dialogues cause teachers to reaffirm their own position on an issue, sometimes one that they didn’t even realized they held until it was challenged. Dialogues of disagreement shake and challenge participants’ positions. When the conversations are respectful and thoughtful, speaking with those with whom we disagree is valuable for teachers. One teacher shared that she found it frustrating “to sit with people who clearly, if it really got down to the nitty-gritty, would not appreciate the way I teach about Israel and I might not appreciate the way that they teach about Israel. But I appreciate their integrity and I appreciate that they are open to growth and change and dialogue. I want to be that way, too. So we can be different and then we can grow from each other.”

If the facilitator clearly articulates that the disagreement is valuable and helps participants focus on learning from one another rather than trying to win a debate, teachers in a dialogue of disagreement can learn about one another and about themselves. A conversation that is frustrating can be one that is ultimately energizing and empowering.

Dialogues of disagreement can build empathy

Some dialogues of disagreement help illuminate opposing perspectives. One teacher explained that for him, hearing how other people think “is a huge part of the learning. I definitely felt like hearing the various perspectives just opened my eyes to the different ways to think.” Opening his eyes to different ways of thinking didn’t mean coming to agree with those ideas. Instead, those conversations offered new perspective on beliefs that had previously seemed wrongheaded or confusing.

Another participant noted that her conversations with teachers who held significant ideological differences had been particularly important for her. Initially, she had expressed hesitation about the value of working together with people who weren’t focused on the same goals, but eventually was able to articulate that “if there’s one thing that you need to have if you’re involved in Israel education, it’s the ability to be to the other person what you want them to be to you. If I want people to hear my ideas and not judge them, if I want people to listen, I really need to practice that.”

For many participants, the experience of listening respectfully and carefully to others was itself a powerful experience for expanding perspective and building empathy, irrespective of whether or not they changed their own minds. This ability to listen to difference without either forcing consensus or focusing too sharply on points of disagreement is a critically important skill for any educator who works in a diverse setting. Highlighting and naming difference without attempting to change it can form the backbone of a respectful pluralistic community, and this is especially true when Israel, or any other sensitive subject, is the topic. Building empathy is a crucial component of professional and personal learning for day school teachers, especially when they seek to have deep and meaningful conversations about their practice.

Dialogues of disagreement can clarify a participant’s stance

While sometimes participation in a dialogue of disagreement allows for understanding the perspective of others, dialogues of disagreement also serve to clarify participants’ own ideas. Reflecting on the experience of hearing the group discuss her curriculum in a Critical Friends session, in which several colleagues disagreed with her approach, one teacher nervously noted, “Some people really are coming from a very different place than I am, and they want to teach kids to feel the same way they do. I’m not doing that, and I feel a little in the closet, I think, now that we’re talking about this.”

It was uncomfortable for her to be “in the closet.” But it was also helpful in that it allowed her to see the boundaries (or walls) of her closet. Naming what she was “not doing” was a helpful way to solidify what she was doing. Identifying the motivations of others helped clarify her own motivation when it forced her to realize, somewhat unhappily, that not everyone shared that motivation.

The experience of discomfort leading to personal clarification was shared by another teacher. A participant had shared an assignment that asked his students to reflect on various approaches to the Israeli-Palestinian conflict, and had included an option that the first teacher personally understood to be an anti-Zionist position. “His inclusion of that option shook me a little bit. It was hard,” she said, “and it kind of shook me, it was just like, wow… I didn’t expect that.” Even as her eyes welled up while telling her story, she affirmed the value of the experience. When speaking about the diversity of voices in the group, she shared that some opposing perspectives had the effect of “just like shaking my beliefs—which is good. I mean that’s the whole part, the whole thing.”

Hearing other people disagree with their deeply felt positions didn’t change everyone’s mind. Instead, it helped them see their own minds more clearly and identify their own boundaries. Sometimes, facilitators of professional learning focus on the moments where participants learn something dramatically new or shift their perspective. We think that deep learning needs to be paradigm-shattering, full of world-changing insights. But it can be equally powerful for teachers to challenge their own ideas and then feel greater clarity about them, emerging with renewed resolve and commitment.

Both dialogues of agreement and dialogues of disagreement are powerful experiences for teachers and administrators. When we need to articulate shared positions or be strengthened in our commitments to the daily, ongoing challenges of teaching, engaging in thoughtful conversations with like-minded colleagues can be refreshing and grounding. Facilitators can deepen these sessions by asking teachers to articulate shared values and unpack their work in the service of conversations that go beyond praise and affinity.

When teachers need to deepen their empathy or push themselves to identify their own values and approaches, dialogues with those who are not natural allies are even more critical. When it comes to teaching a topic like Israel, teachers need both support and supportive challenge. In particular, facilitators and administrators can work to create spaces where disagreements are not shushed for fear that fights will break out but instead amplified as opportunities for deep learning. In Project Orli, an initiative that combines professional learning for Israel educators with research that contributes to the field of Israel education, we create such spaces in part by using resources from, among others, the Public Conversations project (www.publicconversations.org) and Resetting the Table (civility.jewishpublicaffairs.org/resetting-the-table), two organizations working to build skills and opportunities for constructive conversations among those who might disagree.

Teaching, even in supportive and vibrant day school communities, can be lonely. When teachers have a chance to talk together, each discussion is an opportunity for connection that can deepen their learning, whether they agree or disagree with the colleagues across the table. 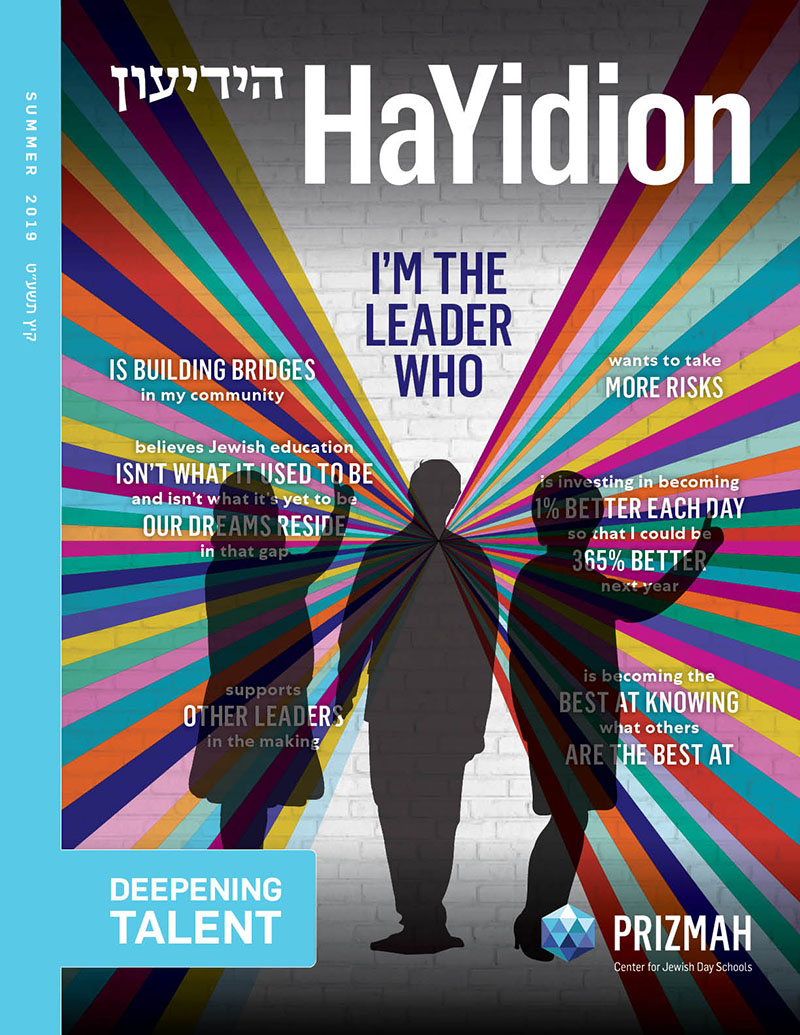