This article records my experience teaching one ethically troubling talmudic passage to the top section of sophomores at Gann Academy, a pluralistic high school in Waltham, Massachusetts. My teaching goal is to give students the experience of and strategies for wrestling with the tradition, rather than ignoring those parts of Judaism that do not immediately appeal to them, or rejecting Judaism because of such elements. I also see value in challenging students’ ethical presuppositions (even when I largely agree with them) so as to enable them to develop more nuanced and reflective positions. Finally, students should have strategies available for defending their commitment to Judaism against critiques based on these texts.

For the material under discussion here I adopted three basic teaching approaches:

Each of these approaches has intellectual, religious, and pedagogic strengths and weaknesses. My hope is that sharing some work by students who were taught via all three approaches above will enhance our understanding of how students are affected by each type of presentation, with special focus on c).

Students were taught the following background perspectives to help them frame the discussion of the challenging text below:

A) David Halivni’s theory that halakhic change in response to moral critique is possible only so long as the moral critique is not explicit. Once the moral critique is explicit, Halivni argues, a change in Halakhah runs a much greater risk of undermining the authority of the Law as a whole, and hence is generally rejected. The idea is that if we are willing to judge even one halakhah morally deficient on the basis of an external standard, we have essentially declared that standard a better reflection of the Divine Will than halakhah, and have no argument against anyone who chooses to live by that standard rather than in accordance with Halakhah.

B) Mishnah Eduyot 1:5-6—two justifications for the preservation of minority opinions:

C) Yaakov Kaminetsky’s argument that the possibility of conversion to Judaism is an adequate defense for Judaism against the charge of racism; since anyone can become a Jew, it follows that Judaism cannot believe that Jews are biologically or genetically superior to the rest of humanity.

D) My own concern that the technique of reconstructing minority or suppressed voices can be applied to almost any issue in rabbinic texts because of those texts’ dialectical structure, rooted in discussion and argumentation, and that this approach therefore runs the risk of undermining all authority unless reliable criteria can be established for distinguishing convincing from unconvincing reconstructions.

A) Taking the Sugya As-Is

Non-Jews are liable if their ox gores an ox belonging to a Jew, but Jews are not liable if their ox gores an ox belonging to a non-Jew. The Babylonian Talmud (“Bavli”) claims that this result requires an inconsistent reading of the relevant biblical verse as well. In an extended and discursive discussion, the Talmud apparently concludes that this ruling can be justified by, and only by, denying all non-Jewish property rights. One element of this discussion is a statement by Rabbi Meir that non-Jews who study Torah are equivalent to the High Priest. Another is a story in which Roman inquisitors raise the issue of the inconsistent biblical reading; they are given no reply, but forgive this in their view solitary flaw in light of the rest of Torah. The Talmud then segues into a set of apparently unconnected narratives.

The simple reading of this discussion as I presented it in class is that the Talmud sees no moral difficulty with this halakhic discrimination against non-Jews, only the intellectual difficulty that it appears to require an incoherent reading of Torah. Even the Roman inquisitors object only on the ground of intellectual incoherence. As the discriminatory legal conclusion goes against just about every American Jew’s moral instinct, this sugya is a “difficult text” for students.

Students were shown that in the Jerusalem Talmud (“Yerushalmi”), the Roman inquisitors make the moral critique explicitly about several laws discriminating against gentiles, and Rabban Gamliel responds by unilaterally altering one law, although not the law of our Mishnah. Furthermore, the halakhic midrashim provide two exegetical solutions that enable the Mishnah to read its biblical sourcetext coherently. As the editors of the Bavli were likely aware of these solutions, and of Rabban Gamliel’s position, I suggested that the Bavli deliberately avoids both mentioning the moral critique and responding adequately to the intellectual critique. The Bavli thus makes the Mishnah’s law dependant on disregard for non-Jewish rights.

Students were then shown that the apparently irrelevant narratives following the sugya can each be read as critiques of the rationales for discrimination against gentiles offered in the halakhic sugya. Finally, students were shown that the statement by Rabbi Meir that non-Jews who learn Torah are considered equivalent to the High Priest originally referred to converts.

These points were collectively marshaled to make the argument that the editors of the Bavli sugya were deeply troubled by the Mishnah, but did not see themselves politically capable of overturning it. They therefore chose not to include the moral critique explicitly, fearing that this would lead to the Halakhah being permanently frozen. Instead, they exposed the problematic basis of the law, rather than veiling it in exegetical technicality; they included the moral critique implicitly, via the narratives; and they created a halakhic countertext by transferring Rabbi Meir’s statement to the context of still-gentiles. The Bavli thus contains a subsurface editorial voice that supports the students’ intuitive sense that the Mishnah’s law is unjustifiable. This voice is more explicit in the Yerushalmi. In both Bavli and Yerushalmi, however, this voice fails to muster a halakhic majority, or even a formal halakhic minority opinion, that overturns the Mishnah.

A) Write three paragraphs total responding to the argument below. Please note that I do not endorse the argument. The evaluation rubric will consider your understanding and accurate citation of ideas and texts we learned in class as well as the strength of your arguments and the clarity of your formulations.

The discovery of a suppressed voice in the Babylonian Talmud that ethically critiques the discriminatory rule of our Mishnah re: goring oxen makes it harder to overrule that Mishnah and change the halakhah in our day, as we can no longer claim that contemporary ethical discomfort with the Mishnah is based on new arguments that the Tannaim were unaware of and did not consider.

B) Answer the following question in approximately three paragraphs and post it to the conference. Same rules as last time: no direct responses to classmates, and put your text in the body of the email.

If you were teaching the Mishnah about “An ox owned by a Jew” to a 10th grade class at Gann, which of the sources and arguments we’ve learned would you think most important for your students to read and consider? Which would you think least important?

Validating their own positions in a Jewish context

a. I would teach them the texts that helped us to see the hidden voices who had moral arguments against our Mishnah. Despite the argument that finding a moral argument in the text can undermine our ability to support that argument, I think that for many of the students at Gann, they would rather know that some of the writers of the Talmud felt the same way that they do about how to relate to gentiles than find a way to lawfully justify a law that, from their life, they cannot understand.

b. It could be easy to be put off by this sugya and one might think that any traditional scholar agrees with the obvious prejudices towards gentiles expressed in this sugya. Therefore, we must show that there may have been a group of equally informed and smart scholars who also saw a problem with this text.

c. I think one of the most important things to point out is how Rabban Gamliel too knows that there is a moral problem with how Jews treat non-Jews. This way, the students are less concerned with the fact that it seems like the rabbis and maybe even Judaism think lowly of non-Jews.

Looking to change the majority position

a. Even if one were to say that the arguments we have are not new at all...that does not necessarily mean that we cannot accept those arguments too. There are two opinions given as to why the Talmud included the minority opinions. ... The second, which in this situation I think is easier to apply, is that they are so that some day after the text was written, if the minority opinion is found to be more relevant, it can be accepted.

b. I think that when there is a moral critique of Halakhah, the response should not be to refuse to change the Halakhah because that validates the idea that there are morals external to Halakhah, the response should be to evaluate the critique from the standpoint of Jewish morals. As we know from the story of Daniel the Tailor, there are Jewish moral concerns that are not incorporated into Halakhah. The idea that every moral critique is external to the halakhic system is deeply problematic because there are Jewish morals separate from the way the law might be currently.

a. While teaching this sugya, perhaps it is natural to feel the ethical problems with the apparent superiority Judaism has over other religions. It is of utmost importance that the students understand that such is not the case. Kaminetsky’s commentary should come in here.

a. By bringing up the moral argument, students are challenged to come up with a way to solve these types of problems in Jewish texts. Perhaps not to solve them for good, but to recognize that these types of moral problems exist in the Talmud and one must get to a point where one can at least begin to reconcile the problem for oneself.

b. As for big-picture issues, there are two that I think are appropriate to bring up in the study of this sugya: the role of and rationale behind the preservation of minority opinions in the Talmud, and the conflict Halakhah has with the external laws of morality. ... Not only is this a very interesting notion—the presence of inherent danger in changing Halakhah for moral reasons—but it is also a very important one that provides a new way to think about the laws of our people.

c. I think that I would have the students struggle with the double standard (or agree with it) and possibly write a paper trying to understand the sugya without help from deconstruction. I’d try to place a lot of emphasis on the moral problems. Next, after the students have thought about the moral problems with the sugya, I would then introduce them to the Yerushalmi text. I would show those who felt the moral problem with the double standard that there are people who agree with them, and that they are not alone: that there is legitimacy to thinking about morality when following Halakhah.

It would be rash to draw conclusions from the essentially anecdotal evidence of one teacher with one class. But I think my experience supports the thesis that for students not previously committed to the authority of the rabbis, apologetics have limited appeal. Furthermore, such students are unlikely to reexamine their own deeply held positions because of an encounter with rabbinic texts.

However, these students’ relationship with rabbinic literature is enhanced by finding their presuppositions in it, even as a minority or “losing” voice. In other words, students are willing to engage with the rabbis so long as they have the sense that the rabbis would have understood and engaged with them. Furthermore, students are willing to accept the “democratic process” of Jewish tradition and be outvoted without “checking out,” so long as they are assured their voice is heard.♦

Rabbi Aryeh Klapper is Instructor of Talmud at Gann Academy and Dean of The Center for Modern Torah Leadership (www.torahleadership.org). He can be reached at aklapper@gannacademy.org. 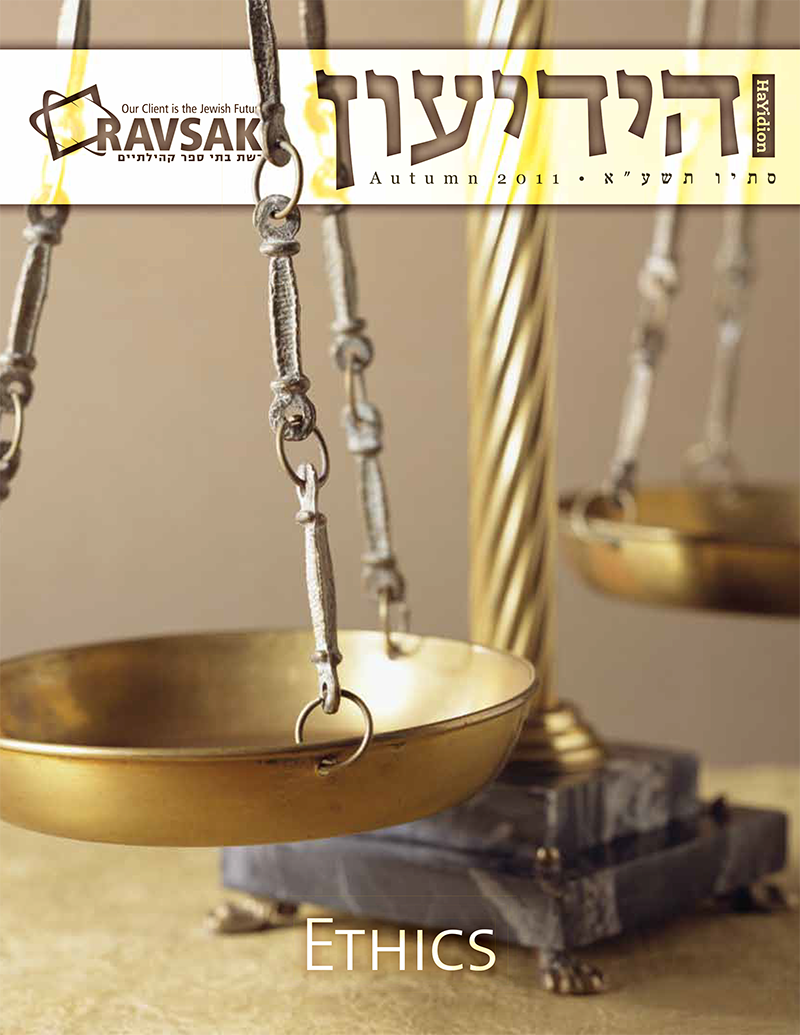