The opportunity, however, is for schools to lose, should they fail to rise to the challenge, as they still monopolize the accreditation systems. For most institutions of higher learning, learning experienced in extracurricular activities is still considered an extra, and few, if any, think seriously about an applicant’s YouTube videos or level achieved in the video game Halo 3. Course transcripts (plus standardized tests) still rule. Meanwhile, civic and cultural institutions are aware of the shifting winds. They are starting to develop alternative assessment models and moving towards an accreditation system which can challenge school’s hegemony. For schools to stay in the game, they need to keep abreast of these early efforts with alternative assessments in our digital age.

At Global Kids, we approach the situation from the youth perspective. Take Tashawna, for example. Tashawna is a high school senior in Brooklyn, New York. In the morning she leaves home for school listening to her MP3s, texting her friends about meeting up after school at Global Kids, where she participates in a theater program, or FIERCE, the community center for LGBT youth. On the weekend she’ll go to church and, on any given day, visit MySpace and Facebook as often as she can. While she misses television and movies, she says she just can’t find the time.

This describes what we can call Tashawna’s distributed learning network, the most important places in her life where learning occurs—not just at home, school and church but also through digital media, like MP3s, SMS (text messaging) and social networks, and at youth-serving institutions, like Global Kids and FIERCE. Some are places that require her presence, like school, while others are self-directed, like MySpace. But the learning she gathers across the nodes in her network are preparing her to succeed in ways no one node could do on its own.

And Tashawna is not alone. In part due to the changes in education, in part due to the effects of digital media, youth have a wide array of options for learning knowledge and developing skills. But how many youth feel in charge of their networks, or are even aware they exist as an interconnected whole? How do they learn to synthesize what they learn and communicate it to future employers and college admission staff who won’t learn of their strengths on most school transcripts?

Global Kids, an afterschool program in New York City that supports youth like Tashawna to be global citizens and community leaders, has begun to explore just these questions. More specifically, we are increasingly asking the following: What do youth need to understand and strategically navigate their distributed learning networks? And how can youth-serving institutions support youth to document the associated learning that address 21st century skills that so often go unrecorded?

We are far from alone in raising these concerns. A number of recent initiatives supported by the MacArthur Foundation (from which we too receive funds) are concerned with the distributed nature of learning experienced by today’s young people and the challenge for both youth and learning institutions to integrate and assess it. While digital media has been a disruptive force supporting the fragmentation of learning environments, it yet remains a potential source for coordinating and synthesizing the experience.

One approach to empowering youth to be more in charge of their learning and make more sense of their distributed learning network is to focus on youth’s existing assets through both digital tools and offline activities to help them see the contours of their networks, understand their role as they traverse their learning nodes, and enhance their abilities to make connections amongst them. The following describes artifacts from three approaches Global Kids has undertaken to further explore these important issues.

I was able above to describe Tashawna’s distributed learning network because she showed it to me, on paper. It looked like this:

Actually, this was her second drawing. She didn’t like her first because she was concerned it wasn’t original. The first one looked like this:

When I first viewed these I paid attention to how she chose to group certain nodes. I noticed the distinctions between informal learning institutions and the formal, between portable digital media and online.

Of course, Tashawna doesn’t walk around with a drawing of her learning network. I don’t think she’d even thought about all the places she learns before I’d asked her to draw these pictures. But when I did it was easy for her to list on a sheet of paper places like home and school. I had to push her, however, to list all of her portable media devices, web sites and after school programs. She wasn’t used to thinking about them all as sites of learning. After each one I asked her what she learned from that node:

Me: What do you learn from texting on you cellphone?

Tashawna: How to spell bad! (laughs)

Tashawna: How to use technology more effectively to communicate.

At the end of the process, as a representative of one of her learning nodes, I was left with a broader understanding of Tashawna’s network, of the resources she brings into our program, and where her learning with us might affect other sites of learning. From Tashawna’s perspective, I hope she began to think, perhaps for the first time, about herself as a participant within her network, as the final source creating meaning by synthesizing the collected learning, and as the one ultimately responsible for learning how to best design and navigate her network, now and in the future.

How might your school position itself different in relationship to your students if you understood their time with you as simply one stop on their learning train? How could your academic programs tap into their interests and strengths being pursued and developed outside the walls of your institution (or behind your library firewalls when they break through them during lunch)?

Even if Tashawna could fully articulate the learning she receives outside of the standard school curriculum, how can she communicate it to others, in a capacity more official than a college essay? Last year, we worked with Henry Jenkins’ Project New Media Literacies to create something which might do just that: a Digital Literacy Transcript.

Henry Jenkins has identified and described the core literacies afforded by new media tools that are essential for full participation in our new digital age, such as Simulation, Negotiation, and Multitasking. Last year, Global Kids developed and implemented a curriculum that used social media to sharpen their literacies while assisting youth to understand how to think about them.

Below is Tashawna’s transcript by the end of the school year (see picture above).

The Transcript turns each literacy into a triangle-shaped badge. Each corner represents a different relationship with the literacy: I can recognize it, I can talk about it, and I can do it. At the beginning of our program, each youth’s Transcript was blank. Over the course of the program youth watched their Transcript grow as badges were earned through completing social media projects in the program while also submitting existing work (fan fiction, podcasts, etc.) that demonstrated evidence of their existing competencies. For example, you might note that Tashawna completed her “negotiation” badge, was working on her “networking” badge, and never began “performance.”

The Transcript served as both a feedback mechanism to motivate and guide learning and an alternative transcript to show colleges or prospective employers about abilities which would otherwise go unrecognized.

What might it look like within your school to recognize youth’s skill development across programs, to develop rubrics and represent them as badges to earn, and use a game-like system to provide not just summative but formative feedback over the course of their time with you?

How could a college or potential employer viewing Tashawna’s Digital Literacy Transcript know that she actually learned the referenced skills? And for those new to the terms—which, to be frank, are most of us—what could she do to make these concepts clear and concrete? Enter the Digital Media Portfolio.

Each portfolio is personally curated by youth like Tashawna to offer an audio and visual tour of their social media productions that highlights the literacies developed through each social media project. This stands in contrast to the Digital Transcript, which is official and controlled by Global Kids. It also provides the opportunity and space for the youth to engage in a round of public meta-cognition, talking about what they learned, developing the skills required to do so in a job interview or college application.

What would it be like if youth in your school curated their own portfolios, viewed their peers, and made them available to their teachers, school administration, and their parents? Would they reveal achievements not captured by the school transcript and tap into unexplored motivations for learning?

Global Kids is new to these three approaches—Distributed Learning Maps, Digital Literacy Transcripts and Digital Literacy Portfolios—but this year will expand them in a variety of contexts.

The new MacArthur Foundation-funded Edge Project (projectedge.ning.com) will allow us, as part of a broader initiative, to bring the Learning Maps into civic and cultural institutions that use digital media for learning. Meanwhile, the Transcripts and Portofolios will be rolled out in Winter 2010 in seperate programs within the New York City Public Library, the American Museum of Natural History and the Bronx Zoo. And, in fact, we’ll be stepping into schools ourselves, working with a Jewish day school in the Gulf Coast region to explore what happens when the faculty and youth develop their own badge rubrics and incorporate the portfolios across their classes.

Ten years from now, whatever will serve as the standard models for assessing youth’s learning might very well look, from our modern expectation, rather strange. Whether your school is still around then might very well depend how well it is prepared to welcome the strange and co-exist with the discomfort of change.

Barry Joseph directs the Online Leadership Program at Global Kids, Inc. He can be contacted at info@globalkids.org. 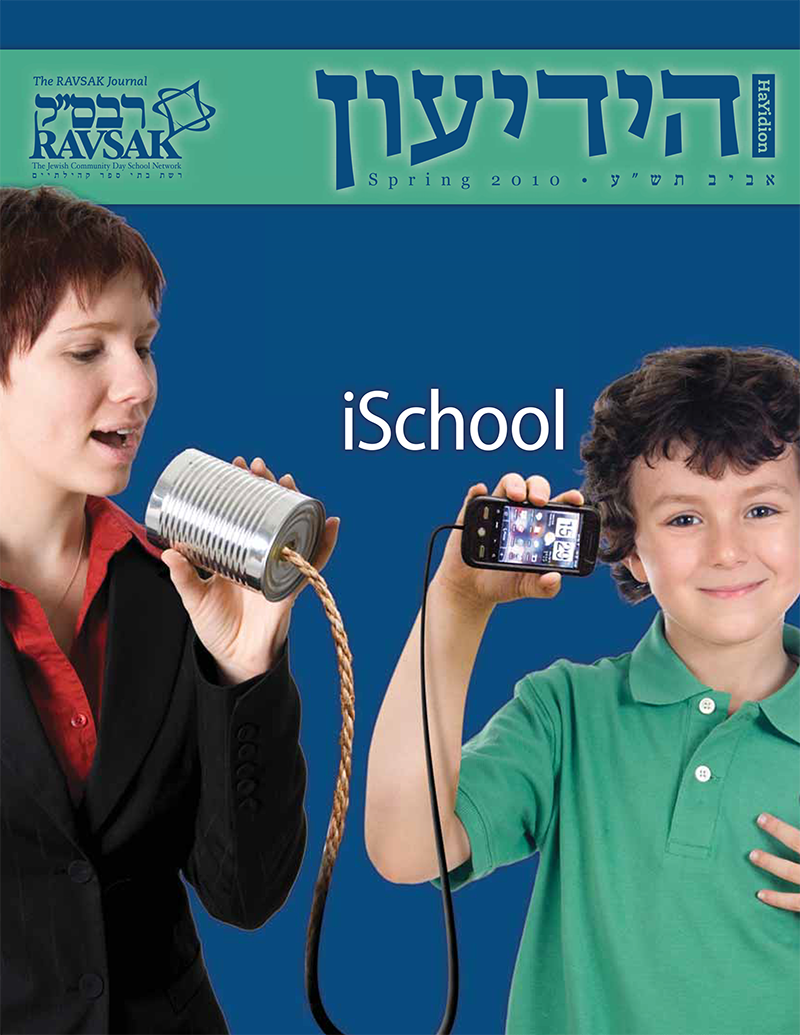