Israel Studies and the Hebrew Language

Let me frame this through an example. Last summer I taught an intermediate language class. My students came to the program in order to improve their language skills. Their goal as intermediate level learners was to become advanced users of Hebrew by the end of the summer, which included refining their linguistic abilities, improving their understanding of how to analyze verbs, and acquiring higher level vocabulary. They wanted to master all these skills in order to become true users of the language; they wanted to be able to interact in Hebrew with Israelis and with Israeli culture.

In order to enable them to fulfill their goals I carefully chose authentic texts that demonstrated how the language “behaves” in real life settings. We skimmed the linguistic components in the text and discovered that in order to truly understand the intention of the writer we had to be able to decode all of the cultural clues and understand the assumptions within the text. For example, in order for the students to truly understand what was going on in a passage from writer Haim Gouri I had to explain the dynamic of the grocery store experience in Israel, what מילואים (the reserve army) is, when and why for many years there was a radio program named “המדור לחיפוש קרובים” (Searching for Missing Relatives), and so on.

There is no doubt among language educators and policy makers that in order for foreign language learners to achieve the aforementioned goals they need to become well versed in the culture of the target language. This connection between language and culture is embedded and well articulated in the national standards for foreign languages in the United States:

Through the study of other languages, students gain a knowledge and understanding of the cultures that use that language and, in fact, cannot truly master the language until they have also mastered the cultural contexts in which the language occurs. (Standards for Foreign Language Learning, published by the American Council on the Teaching of Foreign Languages).

With this in mind, language educators are seeking best practice to enable learners to achieve these goals in the classroom environment. There is a wide consensus among language educators that the ideal way to teach the target culture is by simply teaching the target language. In other words, the language itself is the best source for enabling learners to internalize the cultural knowledge, and the best vehicles for this are authentic materials. “Authentic” sources are material created by native speakers to communicate messages to other native speakers. Hence, they automatically include “higher level culture” taken from the cultural canon such as important literary works, art, and music that are embedded in the social, the political, and the historical context of the given society, as well as “lower level culture” that come from the daily life of the people in the target language, such as food, clothing, popular songs, and holidays, for instance.

Many language educators express the conviction that not only are language and culture intertwined, but that language is the ultimate representation of the culture. The definition of culture created by the National Center for Cultural Competence states that culture is “an integrated pattern of human behavior that includes thoughts, communications, languages, practices, beliefs, values, costumes, courtesies, rituals, manners of interacting and roles, relationships and expected behaviors of a racial, ethnic, religious or social group; and the ability to transmit the above to succeeding generations.”

Elizabeth Peterson and Bronwyn Coltrane from the Center for Applied Linguistics write, “This means that language is not only part of how we define culture, it also reflects culture.” They explain the implication for developing curriculum: “Thus, the culture associated with a language cannot be learned in a few lessons about celebrations, folk songs, or costumes of the area in which the language is spoken. Culture is a much broader concept that is inherently tied to many of the linguistic concepts taught in second language classes” (ERIC Digest Dec 2003).

While the role of culture is on the minds of language educators, the question is whether the role of language is on the minds of culture educators. Or, to be more specific in our case, do Israel study teachers need to view Hebrew as key for their learners to understand Israel in the same way that Hebrew language teachers should understand the importance of understanding Israeli culture for the success of their students?

In essence Hebrew language educators and Israel studies educators rely on a certain shared knowledge base for success. In the case of Hebrew teachers, understanding Israeli culture supports the goal of helping their learners to become true users of Hebrew. In the case of Israel study educators, the same understanding is necessary for their students to gain a true grasp of Israel. This still leaves us with the question of whether Israel studies educators need Hebrew as part of their curriculum. While it is true that students can learn about Israeli culture without knowing Hebrew—studying facts, reading literature in translation, and learning about current events in Israel from English newspapers—this absence would prevent them from being immersed in the culture. The learning goes on at arm’s length, and as in language learning, there is a difference between “learning about” the language versus achieving proficiency and being able to function in the language.

If we wish our learners to become more than just knowledgeable about Israel and Israeli culture, helping them, in addition, to immerse in it and understand it from inside out, we definitely need to use the Hebrew language to make it happen.

To accomplish this, Israel educators need to consider exposing their students to a variety of authentic texts ranging from daily news to poetry, from movies to popular songs. They need to be able to expose them to authentic experiences whether they are holiday celebrations or living with constant security threats. Their goals should be to help their students to be able to read between the lines and synthesize what they know about the society and identify with it. In other words, the same way Hebrew language educators should aspire to make their learners independent users of the language in real life settings by immersing them in the culture of the target language in the language class, Israel study educators need to aspire to make their learners develop an insider’s understanding of Israeli culture.

If indeed the goal of Israel study is to help enhance students’ true connection to the culture, and the culture is revealed through the language, then Hebrew needs to play an important role in the Israel study curriculum.

When teaching about Israel try to group your learners according to their Hebrew level.

In each thematic unit include authentic materials in Hebrew according to the students’ level.

Try to expose your learners to a variety of authentic texts.

Utilize techniques taken from the Hebrew language classroom such as role play, meaningful memorization, listening and reading comprehension activities in order to immerse the learners in the learned topic.

Use your Hebrew language educator in your school as a resource. ♦

Dr. Vardit Ringvald is Professor of Hebrew and Director of the Hebrew and Arabic Languages program at Brandeis University, Director of the Brandeis University-Middlebury School of Hebrew, and Senior Academic Advisor for Hebrew at the Center. She can be reached at ringvald@brandeis.edu.
Suggested Resources:
Teaching and Learning
Author
Vardit Ringvald
Issue
Israel & Zionism Education
Knowledge Topics
Teaching and Learning
Image 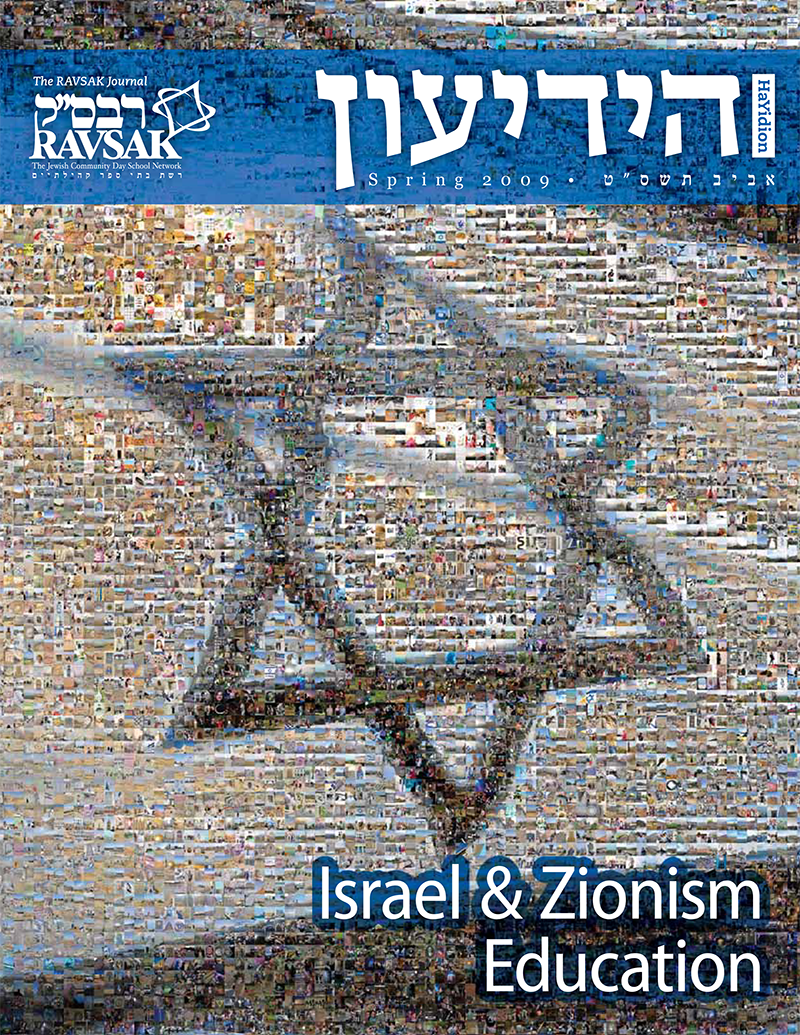