As Jewish day schools work mightily to generate the funds to improve the quality of their programs, maximize mission-compatible enrollment, and strengthen volunteer leadership, they need to tap into every potential resource. I would assert that no available resource base offers more potential than that of inspired day school alumni. There are literally hundreds of thousands of day school alumni whose active support could make a huge difference to our schools if properly harnessed. Measuring Success has conducted extensive research to understand the factors that inspire alumni engagement. That research, combined with my own learning from working over the past decade with well over 100 Jewish day schools on strategic, enrollment and development issues, yields the following insights that I hope will inspire your school to pursue alumni research and cultivation strategies with increased vigor and also consider new ones to unlock this potential.

My personal experience with PEJE programs (Recruitment and Retention Academy, Atidenu and Governance & Finance Academy) indicates that while some schools have a relatively easy time inspiring alumni to support them, others find this to be challenging. Less positive alumni experiences in some area of their school lives, coupled with the fact that many schools have simply not kept in touch with their alumni to continue to cultivate positive relationships, or only reach out to alumni to solicit funds, has created an environment of alumni ambivalence, even negativity in some cases. Compounding these situations is the fact that alumni relations have simply not been a high priority for many school leaders.

Evidence of the lack of priority starts with the fact that many schools do not have anywhere near comprehensive databases containing current information about their alumni, let alone thoughtful, research-informed programs to engage them in a manner that causes them to feel valued. These shortcomings are especially common for K-8 schools because school leaders have assumed that it would be nearly impossible to compete for alumni support when high schools and then colleges and potentially graduate schools are similarly vying for their attention. Yet as we will see, there is evidence that even K-8 schools can create and sustain strong alumni relationships—and parent of alumni relationships—if they start cultivating them early enough and constantly seek ways to add lasting value to their students. There are specific areas of value that tend to distinguish schools that succeed in cultivating long-term positive relationships with their alumni relative to those who do not.

Why is it Important to Inspire Alumni?

First and foremost, it is important because a school’s alumni are its ultimate “product,” its most vivid manifestation of its added value. They are the most informed about what worked for them as students and what did not, and they can serve as invaluable sources of information to school leaders in this regard. They are also the most credible ambassadors to potential students and donors. When schools do not connect prospective families or donors to relevant alumni, who will be positive if not effusive in their support, they indirectly cast doubt about the quality of their schools. Missing out on alumni ambassadorship and advocacy robs a school of its very best tools to build donations, enrollment and volunteer support.

There is an “elephant in the room”: In some schools, the historical program quality was not at the elevated level of its current program. Such schools may have alumni whose experiences were not the most positive in nature. Current school leaders may find themselves rebuffed in outreach attempts to alumni (particularly when they are geared to “what the alumni can do for their school” and not the reverse). My advice to such school leaders is to face into the problem. Actively engage with your alumni, learn about and accept their criticism, and discuss what you have in common and what you can do together to enhance your relationship. Often, within the medley of memories of your school, there are both good ones—often connected to exemplary faculty role models and events—in addition to less positive ones. Take the time and make the effort to learn about and acknowledge both. While not all negative alumni relationships are salvageable, many are.

In general, schools that continue alumni relationships and value-added connections (those that provide mutual benefit, not just as a means for alumni to give money) find they reap enormous dividends.

One of Measuring Success’ independent school clients that works intensely at alumni relationships generates 20% of its annual campaign from alumni gifts, year after year. And the dividends are not only from the alumni, but often also from their parents who are more likely to continue to support their children’s day schools after graduation if their children continue to have a connection to the schools. A good example of such a school is the Solomon Schechter Day School of Metropolitan Chicago, a 50-plus year preschool-eighth grade school that, based on benchmarking analysis, generates a highly competitive $2,000 per student from alumni parent gifts each year. This level of support comes because of hakarat hatov, the Jewish value of desiring to express appreciation, and also a great deal of hard work on the school’s part to maintain alumni connections and alumni family connections.

One important way to stay in touch with alumni, learn about their experience with your school and the difference it made in their lives, and about how they would like to stay in touch with your school, is by conducting relatively frequent alumni surveys. They provide a research-based roadmap on how to create positive alumni relationships in the first place and how to maintain them over time. In recognition of the importance of alumni surveys, Measuring Success, in collaboration with Prizmah, is about to launch a new series of alumni surveys (along with a new complement of parent and student surveys) this spring that offer a great opportunity for schools to build their alumni program from a solid fact base informed by peer analysis.

How Do Day School Alumni Compare with Independent School Peers?

A key reference point for how well our schools are doing inspiring alumni affinity and support is how well we perform relative to peer independent schools. Measuring Success has some recent information from alumni surveys that sheds interesting light on this issue. From 2013 to 2015, Measuring Success conducted surveys involving more than 3,000 independent day school high school alumni from six independent schools, three secular schools and three Catholic schools. During that same period of time, it conducted surveys involving more than 1,200 Jewish day school high school alumni from four schools that spanned the Jewish denominational spectrum. These survey results are, admittedly, from a relatively small number of schools, but they are revealing and suggestive of the need for additional research, which we are intending to conduct in conjunction with Prizmah.

What is causing the relative enthusiasm gap? In attempting to understand the gap I examined the ratings the Jewish day school alums gave their schools relative to those of the non-Jewish independent schools and discovered something interesting and potentially of great importance. In the arena of academics, there was very little difference in satisfaction with alma mater performance between the Jewish day schools and the independent schools.

However, when it came to believing their schools were very helpful in advancing their time-management skills, social relationships and college and career and leadership potential, the independent schools’ alumni gave much higher ratings to their alma maters than Jewish day school alumni gave to theirs.

All of these differences were statistically significant and worth paying attention to as potential levers to inspire greater alumni support. What can Jewish day schools learn from this? Our schools need to start paying more attention to the quality of life of our students in school and to giving them a foundation that will enhance their future lives following graduation. Most crucially, day schools need to ensure that students perceive the value of the benefits they receive while they are still in school.

What Can We Learn from Jewish Day Schools that Effectively Inspire their Alumni?

Why? Let’s start with the factors that did not differentiate the higher- and lower-performing pairs of schools. The school pairs did not differ in their assessment of the quality of their academic preparation in English/language arts, math, science, history and social studies or music/drama/dance/performing arts or visual arts. Nor did they differ in their perceptions of the extent to which they felt their schools supported them in being accepted to an appropriate college or in preparing them for a career of their choice.

Where they differed significantly was in three key areas: the extent to which alumni felt their schools had a strong positive impact on the development of critical thinking skills, of empathy for others, and their motivation to take on leadership roles.

This is not to say that academic excellence or cocurriculars or college guidance are not important—they are. But it does shed at least preliminary light on the factors that students really believe matter in the long run in making their lives successful and worth living. I will call these “the gifts that keep on giving.”

What can Jewish day schools do, post-graduation, to positively inspire their alumni? Here, too, alumni research provides some answers. There are a couple of engagement strategies, including facilitating professional networking opportunities among alumni and organizing alumni social events, that tend to be uniformly popular. But there are other strategies that aren’t uniformly desired by each school’s alumni, which suggests that each school needs to do the research that informs its particular alumni engagement plan. Rabbi Marc Baker, head of school at Gann Academy, credits this kind of research as having made a significant difference for his school. “As a result of the (survey) work, we now have a significantly more robust alumni community than we’ve had before. We’ve ramped up our alumni activities because we learned from Measuring Success what the alumni actually want from us.”

Building inspiring relationships with your school’s alumni is strategically important in creating a higher-quality, more sustainable school. It isn’t easy, but there is evidence that by ensuring that Jewish day schools offer students the kinds of social and emotional experiences and a “leg up on post-graduation life” that they value, and by viewing alumni as a valuable market segment that your school cultivates with research-informed programming, Jewish day schools can succeed and build a foundation for growth and prosperity. 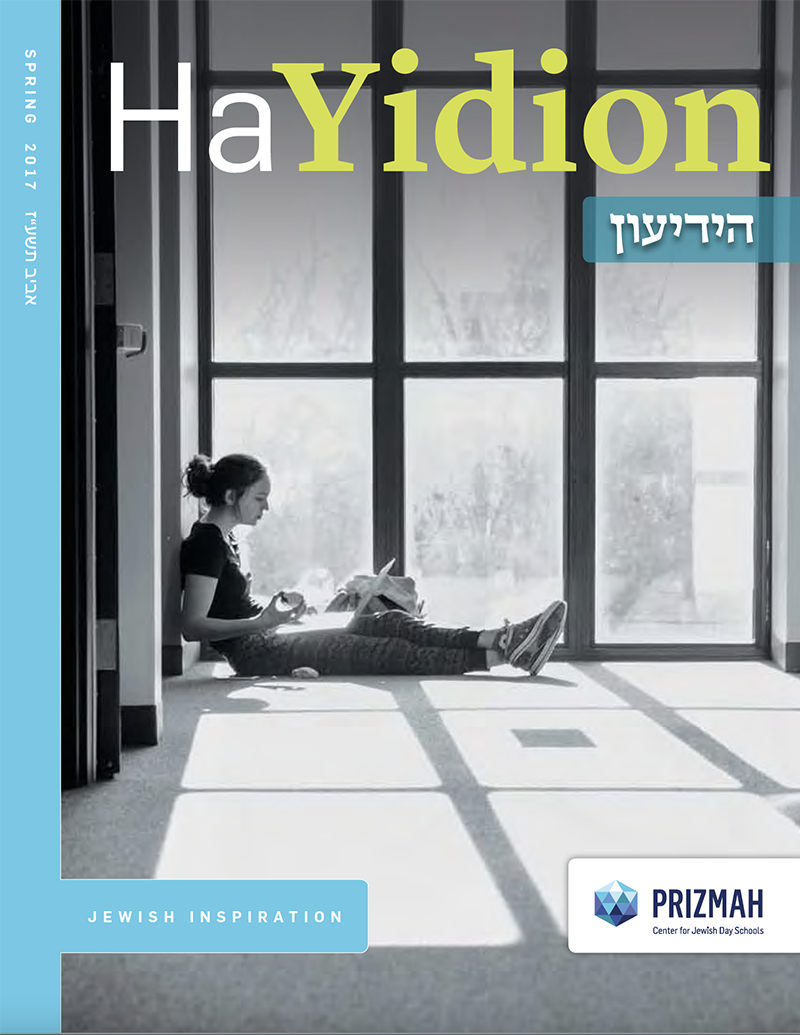