When Two Worlds Meet: Parent Reactions to What Children Bring Home From School

At present, I want to explore what happens when children bring school home; and in particular what happens when the Jewish culture of school and home are not fully aligned. A four-year study a colleague and I conducted of families at seven denominationally diverse Jewish elementary schools reveals that this cultural encounter plays out in idiosyncratic ways, and can constitute a challenge to the conventional assumptions of day school educators. What occurs in the home, I suggest, calls for a sophisticated response at school.

Young children bring school into their homes almost every day. The nine-year old students we interviewed found it easy to provide examples of how they taught their parents things which, they say, their moms and dads had either forgotten or had never known. It is difficult to know how much of what children “teach” their parents is unsolicited and how much has been genuinely unknown or forgotten, but our conversations with parents reveal that when they did not experience an intensive Jewish education of their own, they do find themselves learning about Jewish holidays, practices and concepts from their children. Certainly, they pick up a great deal of Hebrew; it is the aspect of children’s education which, because of the many hours devoted to it in day schools, differs most from parents’ own childhood experience of Jewish schooling.

The most vivid and perhaps the most authentic instances of children bringing school into their homes occur as a result of unexpected and unsolicited outbursts of song, conversation and inquiry with which children interrupt the regular life of the family. These outbursts occur frequently and take various forms. Children launch in to blessings, contemporary Hebrew songs, or traditional festival melodies—in the car to and from school, at home when family are visiting, in the supermarket with parents, or on the street and at the beach.

Not surprisingly, given the diversity of families whose children attend day schools today, parents react to these interruptions in diverse ways. In broad terms, these reactions can be viewed along a continuum from resistance and rejection, on the one hand, to adoption and adaptation, on the other. The first set of responses expresses an inclination to keep things the way they are and not to make changes in the family’s Jewish life; the second set suggests a readiness to make changes as a result of what children bring home from school. While one might have thought that the second set of reactions would be less challenging for schools, it turns out that when families adopt or adapt the Judaism that children bring home, they rarely follow a normative cultural script. In turn, when children transport back to school the diverse and idiosyncratic expressions of Judaism created out of this encounter, they can challenge school culture.

The most extreme strategy available for rejecting what children bring home is to withdraw them from the school altogether. If parents feel so uncomfortable with the Jewish concepts and ideas their children meet at school, they can transfer their children to other schools where they don’t have to meet these problematic ideas and practices.

Our research shows that withdrawals of this sort almost never happen. This is probably because even if parents may not select a day school specifically for its Jewish education, they recognize that Jewish schools do have a mission to impart Jewish culture and ideas. (If parents had insurmountable problems with the school’s Jewishness they likely wouldn’t have chosen it in the first place.) Additionally, most parents seem to feel an obligation to knit school and home closely together; having purposefully selected the school for their children, they feel an obligation to reinforce and encourage what their children learn.

I have found only two factors that cause parents to head for the exits for “religious reasons”: first, when it seems that Jewish education is being provided at the expense of general educational quality, and, second, when parents feel that policies or persons in the school actively challenge the religious/Jewish life they choose to lead at home. In these circumstances, schools would be well advised to address such perceptions since they may indicate problems either in what schools promise parents or in how well they can satisfy such promises.

A marginally more frequent reaction among those uncomfortable with the Jewish education their children receive at school is to resist it, either by complaining about it at school or by compartmentalizing it at home. The first possibility, more familiar because it is more visible, can challenge school leadership, but, more productively, can be viewed as an opportunity to engage parents about the school’s purposes and practices.

The second possibility also represents an opportunity for schools because it is so unstable. Compartmentalization occurs when parents attempt to maintain the equilibrium of Jewish life in the family by framing what children learn about Judaism as not being immediately relevant but as something children should know so that when they’re older they can make an informed choice about the kind of Jewish life they lead. This reaction is difficult to sustain, first because children are reluctant to wait until adulthood to build their own sukkah or observe Friday night, for example, and second because it clashes with the tenor of much that day schools communicate about Judaism as something to be experienced and not just academically investigated. The question for schools is whether they are interested in helping families navigate these shifting responses. Many educators may find such interest invasive of family privacy.

Neither Rejection or Resistance, nor Adoption or Adaptation

One kind of parent reaction often observed in Orthodox schools but rarely in community day schools is essentially a lack of reaction, that is, an absence of change in the family. This happens because children bring home from school what they, the parents, would otherwise have given them or because the school so much complements the way parents already lead their lives. This is often the sine qua non of Orthodox schools that are located at the heart of a well-defined community. It is an uncommon reaction in community day schools because, as emerging parent survey data confirm, a high proportion of community day school parents had not originally expected to enroll their child in a Jewish day school. Given that parents’ Jewish lives did not predict enrollment, it is not surprising that once a child does enroll, parents either resist what children bring home or their lives start to change.

Inferred in the above is the fact that the Jewish lives of a great majority of parents do significantly change once their child enrolls at a day school. This is evidenced in the many instances where parents told us about how “there would be no Jewishness in our lives if our child wasn’t at the school.” A small number of interviewees described precisely how this happens and what it means. It turns out that it means a couple of things.

A first possibility is that parents take on practices that their families had occasionally observed and now perform them more consistently as they become part of a routine organized around the rhythm of the school (and Jewish) calendar. A flavor of what is involved is provided by a father with some supplementary school Jewish education married to a woman who converted to Judaism at the time of their marriage. He explains:

I wouldn’t normally have Shabbat every Friday if Natalie was going to public school, and it’s not that we wouldn’t know how or we couldn’t; it just probably would be easy enough to say, not this Friday! But she has it in school, she brings the challah home. How dare we not! Not out of fear, how dare we not, but of course…

As this father indicates, the driver of change is not any special religious search, it is rather the desire to knit school and home together; this is certainly not some baal teshuva quest for the school to provide the family with an authoritative religious script (something that almost never happens). Parents react in this way because they feel a kind of obligation to ensure that what their children learn at school does not fall on infertile ground. As a byproduct, it results in changes in their own lives, as families reproduce more or less faithfully the practices their children learned in school. For educators, this may be the most unproblematic resolution of any gap between the Jewish cultures of school and home.

More challenging is what we observed taking place in the many (perhaps most) homes where the encounter between school and home results not in the faithful reproduction of some normative script but rather the creation of a syncretized, home-made Jewish culture. Numerous families told us, for example, how their children inspired them to celebrate the festival of Sukkot, and of how they built a sukkah “even it was three months late” or “not exactly the way you’re supposed to,” or how their family decided to mark the festival by going camping. Others talk about creating new family rituals, such as making a blessing every time they hear an ambulance, or saying Shabbat prayers in the car when they’re out on a weekend trip.

None of these parents passively follow the cultural scripts that their children bring into the home. Instead of reproducing traditions, they create them anew, improvising and innovating, drawing on their own diverse cultural assets as well as on those their children have introduced into the family.

The challenge for educators is that the Jewish culture created at home does not stay there; it comes back to school, where children enthusiastically share it with their teachers. At times, children might report that their parents weren’t interested in what they brought home or that they were too busy to hear a new Jewish song. On occasion, they might even report that their parents were upset that they wanted to make a blessing before eating a snack, as they had learned to do at school.

These less than enthusiastic responses might be disappointing to educators, but, I suggest, they are not especially problematic. Educators working in liberal day schools are neither expected to be judgmental nor to proselytize. Such rejection is always an unspoken possibility for all educators engaged in the counter-cultural work of Jewish education.

What teachers might find more provocative is when students hold up as models of Jewish practice unconventional or idiosyncratic adaptations that they practice at home. Are educators expected to be unfailingly enthusiastic in these circumstances? How would most teachers react when they learn from students that their parents weave decidedly non-Jewish ideas and practices with the Jewish practices children learned at school, for example, mixing Buddhism and Judaism, celebrating Christmas and Chanukah at the same time, or on Friday night, as one parent reported, “[doing all] the Shabbat stuff” their children learned and then asking their non-Jewish family members to say a Christian prayer. Is the fact that there is some Jewish content on these occasions better than that there is none at all, whatever else it may be syncretized with?

Ironically, the greatest challenge for schools may come not from those parents who resist or vocally reject what children bring home but from those who adapt it so much that when it returns to schools it is almost unrecognizable as conventionally Jewish. This is one of those instances where school-people should be careful what they wish for. ♦

Dr. Alex Pomson is a Senior Researcher at the Melton Centre for Jewish Education at the Hebrew University. He can be reached at apomson@mscc.huji.ac.il. 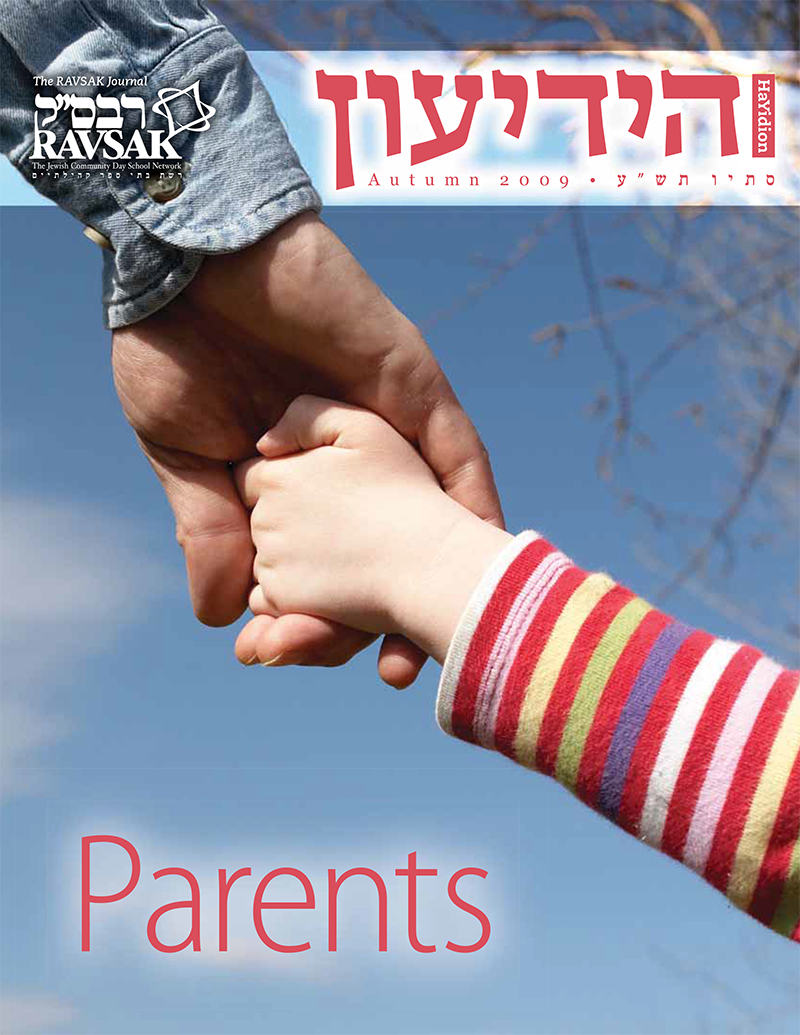