School as Shul: Day Schools in the Religious Lives of Parents

There are aspects of school-life that operate at an existential pitch absent from most other Jewish institutions frequented by parents.

Of course, this is isn’t what the last one hundred years of educational or Jewish history led one to expect of schools. As John Dewey put it, schools were intended to be locations where society placed all it had accomplished at the disposal of its future members. They were not expected to perform significant roles in the lives of adults. Likewise, for much of the twentieth century, Jewish day schools appealed most to families whose lives were already rich with Judaism and who feared a future erosion in the intensity of their children’s Jewish lives if they attended public schools. Today’s day school parents are different. Many rely on their children’s Jewish schools to provide the Jewish knowledge, inspiration and community they do not possess at home. Some parents even seek that knowledge, inspiration and community for themselves, having missed out when they were younger.

A great unexplored frontier for day school education may well be their potential to bring Jewish purpose to the lives of parents. The argument, derived from a study of parents at seven different Jewish elementary schools in the United States and Canada, is more fully elaborated in a recently published co-authored book, Back to School: Jewish Day School in the Lives of Adult Jews. The title of one of the book’s key chapters is self-explanatory: “The School as Shul: Jewish Day Schools as Places of Worship, Study and Assembly, for Parents.”

Historically, the synagogue has been identified as performing three primary sociological functions: (1) as beit keneset—a site for social fellowship, indicated by the etymological root of the Greek word synagogue, meaning “place of assembly”; (2) as beit midrash—an educational institution, symbolized by the vernacular Yiddish term shul, meaning “school”; and (3) as beit tefillah—a place of religious worship, the synagogue’s original function in the ancient world.

Today, there is evidence that day schools play all three of these roles, frequently to great effect, but often unknowingly. Most obviously, schools enable parents—through their involvement in their children’s education—to develop new social networks. A parent interviewee once stated as fact to one of our research team, “You always become friends with the parents of your children’s friends.” Actually, we found that this was by no means so for all those we interviewed, but it was often the case for families on the edge of the mainstream Jewish community such as converts to Judaism, gay couples, interfaith couples, and those who had recently relocated to town. As a result of parking-lot conversations, play-date arrangements, shared involvement as school volunteers, and plain old-fashioned gossip about teachers and administration, families with limited Jewish social networks built webs of connections that became deepened and extended outside school to the extent that parents marked life-cycle occasions in the company of other school families and celebrated Shabbat and festivals with them.

Less expected, there is evidence that day schools provide parents with many opportunities for learning and intellectual growth. This learning is rarely of the programmed variety; that’s why attendance at adult education programs was usually quite poor in the schools we studied. Parents—unlike older adult Jewish learners—learn while doing, or in order to do (while sitting on a committee or in order to be able to help in the classroom). They do not generally get involved in order to learn. They learn most from their peers rather than from an instructor, and, it turns out, many learn a great deal about Jewish life and practice from what their children bring home from school. Some parents have indicated to us that while their (immigrant) grandparents once served as sources of knowledge and inspiration for Jewish family life—on Friday night, for example, or at the family seder—today, it is their day school children who play this role for the extended family.

Least expected, parents report that they find in schools the kinds of “unimaginable moments of beauty” that seem lacking in synagogues where, as one parent put it, “The program is so scripted.” To put it in more sociological language, there are aspects of school-life that operate at an existential pitch absent from most other Jewish institutions frequented by parents. When the events at school are conducted with authenticity and spontaneity, they enable parents to confront questions of rare personal importance. Parents gain in schools what sociologists of religion call “intimations of the ultimate” of the kind that people tend to experience in hospital delivery rooms and cemeteries.

If it seems shocking to compare schools with cemeteries and hospitals, it’s worth considering for a moment what schools promise parents: the possibility of touching a different future for their children and themselves. When schools successfully embody a sense that the world is somehow different inside their walls, they invite an encounter with the ultimate questions of life, encouraging parents to wonder what their child might become. For Jews, vividly described by Simon Rawidowicz as an ever-dying people, a minority doubtful of its own survival, such ultimate questions can feel even more acute when one visits a Jewish elementary school. Parents can find themselves wondering whether things will be different for this group of Jewish children, whether they will find it less complicated to be Jewish, less difficult to juggle integration and survival.

If these are some of the emotions and responses that parents experience at their children’s schools, what are school leaders supposed to do? Should they seek to cultivate such reactions? Should they be involved in the nurture of families’ private Jewish lives? Ultimately, every school must determine how they answer these questions for themselves. From my perspective, there is both an opportunity and a challenge here. There is an opportunity to extend the mission of day schools to socialize children into lives of Jewish purpose, since children will find what they learn at school to be more meaningful when they see that it also engages their parents. The challenge for schools is that if they embrace this opportunity it will, first, require opening their doors more widely to parents, and I have found few schools that are not ambivalent about taking such a step. Second, schools need to determine who in the faculty has the skills to connect with parents in respectful and effective fashion. Most school professionals took up their work because they enjoy working with children. Some are uncomfortable when it comes to working with adults, as is often evident on parent-teacher nights when the most competent teachers can suddenly seem horribly awkward. Schools, then, must figure out who in their faculty will service parents’ needs for connection, learning and inspiration, and how they will go about doing so in ways that are not patronizing or prescriptive.

These are not comfortable or everyday kinds of questions to consider. In fact, they are the kinds of questions that call for great clarity concerning a school’s Jewish purpose in relation to children and their families. One might say that they constitute what is truly the bottom-line of day school education. ♦

Dr. Alex Pomson is a senior lecturer at the Melton Centre for Jewish Education at the Hebrew University of Jerusalem. Together with Randal Schnoor he is the co-author of the recently published Back to School: Jewish Day School in the Lives of Adult Jews. He can be reached at apomson@mscc.huji.ac.il
Suggested Resources:
Teaching and Learning
Author
Dr. Alex Pomson
Issue
Religious Purposefulness
Knowledge Topics
Teaching and Learning
Published: Fall 2008 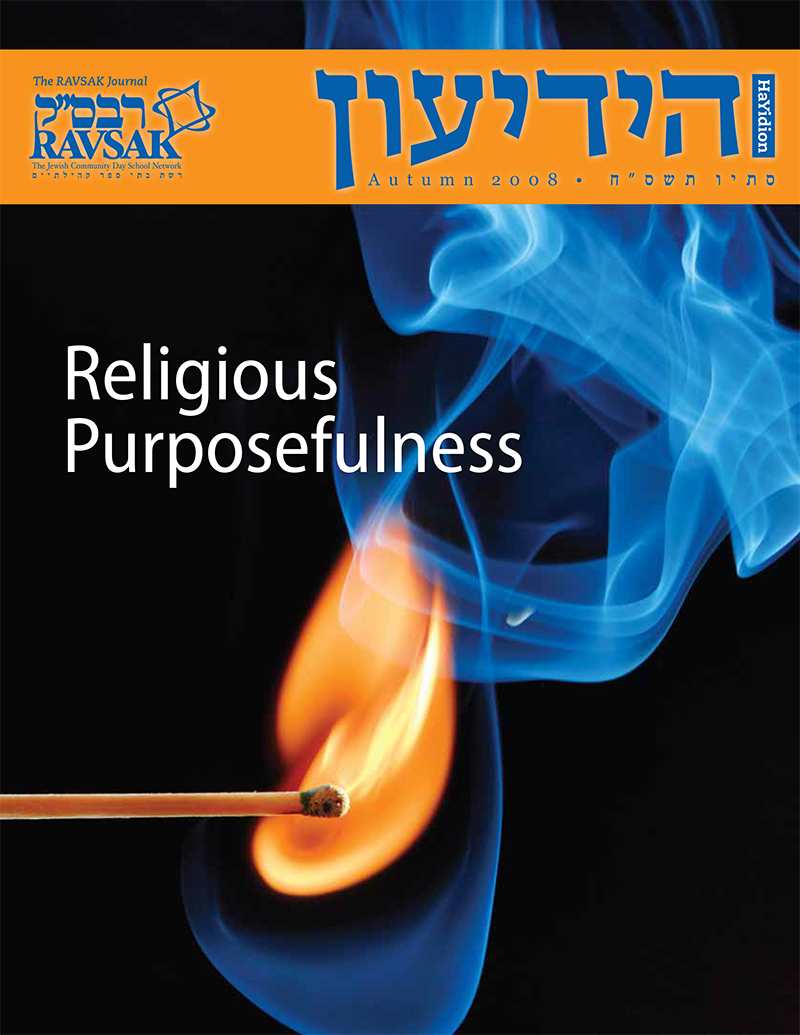