I write this article about time as we are all on coronavirus lockdown, when time has come to be something weird and strange. Jokes abound about canceling the days of the week, since it’s starting to feel as if each week is one long day.

But this time spent apart from normal time allows us to think about the concept of school time in new ways, something educators have actually been doing even before we suddenly had to rejigger entire school schedules and come up on the fly with ways to learn online. At our project-based learning school, The Idea School, we’ve attempted to reconfigure school time, based on research into adolescent needs and student learning outcomes, in order to improve students’ ability to be present, focus and learn subjects with greater depth.

Here are some insights we’ve gleaned from educators who’ve been having these discussions for, well, a long time.

The neuroscience research on the efficacy of later start times for middle and high school students is well-documented. One 2016-17 study conducted by University of Washington researchers on sophomores in the Seattle school district found that when its secondary schools switched their start time from 7:50 to 8:45 am, student performance improved in many areas. First, students benefited physically, getting one hour more of sleep that they needed and bringing them closer to achieving the approximate nine hours recommended for teenagers. Student sleep patterns were also less disrupted, so the teens needed to play less catch up on the weekends. The study also found that students were less tired during class. They had fewer tardy arrivals and absences and academic performance improved.

Our school used current research around school start times when it chose to open at 8:30 am. Our local school district also considered a later school start time. Reporter Deena Yellin covered the debate:

Experts say, with the onset of puberty, teenagers experience a change in the release of the sleep hormone melatonin, which helps regulate the body’s day-night rhythms. During adolescence, it is secreted later in the day and ramps up at night, which means teenagers don’t become drowsy until 11 pm. And because of that cycle, moving bedtime earlier doesn’t help either, according to a report by the American Academy of Pediatrics.

Yellin quoted Dr. Sigrid Veasey, a professor of medicine at the Perelman School of Medicine at the University of Pennsylvania, who added that inadequate sleep in teenagers can lead to depression and other issues and who supported the idea that increased sleep means improved academic performance for teens.

In Overloaded and Underprepared: Strategies for Stronger Schools and Healthy, Successful Kids, authors Denise Pope, Maureen Brown, and Sarah Miles suggest a total rethinking of the structure of the school day. Pope, a senior lecturer at the Stanford Graduate School of Education, focuses on academic stress and its effects on student mental health and wellbeing. She founded Challenge Success to address how the current school schedule and workload is damaging to students, and through her organization, she works with schools—many of them private, elite ones throughout the United States—to change the way they think about learning.

Kindred spirits—we’re not only both progressive educators agitating for school reform, we’re also Jewish women from the San Fernando Valley—Pope and I have had a number of conversations about the state of education in America today. One of the first things she does when she sits down with a school to make changes is discuss the daily schedule with the principal/administration.

School leaders in middle and high schools: Take a moment to bring up a student’s schedule on your computer. How many periods are in a school day? How many times does a student have to switch codes—move from one language to another? And I don’t just mean a native language to a foreign one, be it Biblical Hebrew, Mishnaic Hebrew, Talmudic Hebrew, modern Hebrew, Spanish, French, Arabic or Chinese. How many times is a student moving from the language of science to the language of math, history, English, engineering and more?

A recent trend among educators has been to follow a student schedule through a day of school, in order to truly imagine what a student experiences in the classroom. One educator I spoke with who did this shared that she burst into tears at the end of the day. She acknowledged that some of that was because she had no peers; she had gone through the day essentially by herself and had felt extremely lonely and isolated. But she also conceded that the day had been long and draining. She could imagine that the only thing making it palatable for teens was their social interaction.

Pope advocates for implementing block scheduling. In a block schedule, classes meet fewer times a week but for longer periods. This means, of course, that teachers cannot teach only frontally. Students cannot hear a lecture for 60 to 90 minutes, so this type of scheduling also ensures that teachers create interactive, hands-on lessons. In addition, as project-based learning guru Ron Berger points out, block scheduling allows for deeper learning. Not only does a packed schedule create student exhaustion, but it also prevents students from getting deep into learning. In a 40-minute period, the first five minutes of which are often spent having students enter the room and get settled, there’s only 35 minutes to engage with course material.

In a longer period, anywhere from 50 to 90 minutes, students have time to settle into learning and grapple with its complexity. They have time to understand the language, both literal and figurative, of the discipline they’re studying, and they also have the time to create products of learning out of their studies. When I was in schools with 40-minute periods, creating videos, for example, with students was impossible. No sooner had they taken out the equipment and set it up than it was practically time for them to finish. By contrast, at The Idea School where courses are in blocks of anywhere from 50 to 120 minutes and students are also given time to work on projects, they can get deep into their learning and have time to create products from it. There’s a natural and organic process to the learning.

Of course, it’s not perfect. Sometimes the students complain that the classes are too long and they feel exhausted by that, too. These complaints challenge us in the school to make sure the students aren’t engaged in the same type of activities all day long, that they experience different modalities of learning throughout the day. In sum, changing a school schedule by implementing block scheduling opens up a wider discussion about what the entire school day looks like, what constitutes real and deeper learning, and what kind of learning experiences students are engaged in during each class. These are welcome and important discussions.

Changing a school schedule also sparks discussion about another important topic related to time and that’s how to manage it. At The Idea School, this is an almost-daily discussion among staff and students, and that’s because when students, particularly ones who come from traditional settings, have more time on their hands and more freedom with which to play with it, the first thing they often do is waste it. That may not be a bad thing; for students whose lives are overprogrammed, “free” time is a gift, an opportunity to “chill” and just be.

Though I’m passionate about project-based learning, my deeper concern is about the increase in teen anxiety, depression and other issues that I’ve witnessed over the past decade, and one way we can address the problems our students are having is by giving them time not only to manage their mental health issues, but to create good self-care habits that prevent them from happening or becoming too unmanageable in the first place.

But that doesn’t mean that when we give students more time, in the classroom or outside of it, that they’ll manage it well. In fact, they often don’t, and that’s because time management isn’t a skill we teach in school, often or at all. But we should. If we’re serious about making changes to our school schedules, then we need to give students the tools they need to succeed with these changes.

We use advisory sessions, our learning specialist and our faculty to find time management strategies that will work for each student. However, we know that not every student starts at the same place when it comes to time management, nor might they embrace the strategies we offer at the same rate. Some students aren’t even aware of how large an issue the habit is for them.

One way we encourage reflection on student habits is through what we call a Presentation of Learning (POL) given at the end of each term. There, students not only review the content and skills they mastered over a trimester and share the artifacts of learning about which they’re most proud, they also assess areas where they’ve grown. They set goals for themselves each trimester and, before a panel of teachers and their parents, they review their progress toward meeting those goals.

It’s wonderful to see students take ownership not only of their own learning but of their time, to hear them explain how they became better at coming to class on time (there are no bells at our school); how they managed their work load more successfully; and how they became more efficient users of class and home time for their projects. POLs are also an important way for us as a faculty to push back on students when they haven’t met their goals and to help them set up structures that will help them better succeed in the future.

Today’s schools have inherited a school schedule that’s packed tight and that, in the last decade, we’ve only packed more tightly. And don’t get me wrong, we’ve packed it tightly with exciting and important opportunities for growth and advancement for our students: STEAM classes and clubs, arts programs, myriad electives and extracurricular activities that personalize learning for students and get them excited about it. At the same time, I fear we’re pushing our teens too hard, demanding more and more of them and giving them no respite.

We have to rethink how we’re using time, so we’re more strategic about it. We should continue to offer our students the rich learning and other experiences that help them thrive, but we also need to model for them healthy ways to use time, which is important for their growth.

After all, having time to sit and be still is important, too. Maybe that’s one of the silver linings that this current chaotic time is showing us. 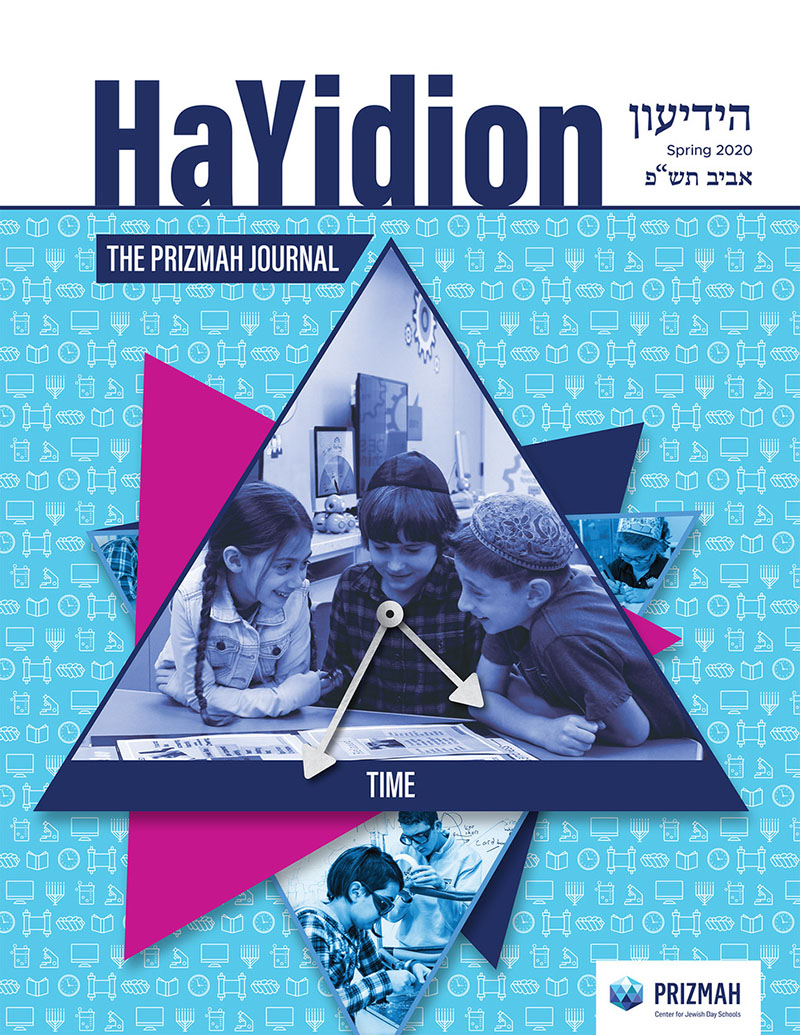 How to Create an Archive