Giving Our Missions a Why: A Cognitive Approach

Try this exercise at your next staff meeting: ask the teachers to state, even in general terms, the mission of your school. Even better, present your students with the same challenge in the course of a lesson. I would venture to guess that several faculty members and students will paint, in broad strokes, the mission or vision of your school. Our school, like many, has posted our mission in every classroom, but I have yet to observe that ever present reminder tangibly impacting the students’ awareness of our stated values. When the individuals, both students and teachers, most intimately connected with the day-to-day operations of our schools struggle to articulate our stated mission, a flaw in either the mission’s communication or formulation would seem to be exposed.

Now, take our experiment to the next level. Ask your subjects the simplest of questions: Why? Why have we chosen a specific mission? Why is it important? Why is what we’re learning and doing at school important? Why is Jewish education and Jewish continuity important? Frequently, students flounder, many understanding such a prompt as some sort of trick question while searching for an absolute correct response. Teachers, staff or lay leaders will often need a moment to collect their thoughts, but usually offer a reason behind the school’s mission.

Simon Sinek, the popular TED speaker and lecturer, coined a concept he labels “The Golden Circle.” Simply put, he identifies three modes of explaining any activity in which we choose to engage (see figure). Communicating in the outermost level of the circle, we explain what we do. Moving inwards, we explain how we do it, and finally why we do it. Sinek points out that most people or groups communicate from the outside in, that is, they first explain what they do and only eventually, if ever, arrive at why they do it.

Great leaders, however, start with why they are acting and only afterwards discuss what they do. In his book Start With Why, Sinek brings examples as diverse as Apple, the Wright Brothers, and Martin Luther King Jr., explaining how each of them succeeded where others with greater resources or potential failed because they were working “from the inside out” of the Golden Circle. They articulated why their vision was important, not just what they were trying to accomplish.

The underpinnings of Sinek’s assertions lie in how our brains make decisions. Though we like to think of ourselves as rational and our decisions as well thought-out, many of our choices rest on beliefs and loyalties that have little correlation to strict rationality. To simplify, our brains have two distinct systems functioning simultaneously. Our outer brain, the neocortex, manages our perceptions, language, judgment, and the like. Much of our humanity derives from this area, and many of its features are uniquely human.

But below the surface lies our more primitive brain, a diverse range of structures labeled the limbic system. Among other things, the limbic system determines our loyalties, beliefs and ultimate actions. Moral psychologist Jonathan Haidt explains the relationship between our rational thought and our beliefs as analogous to a rider and an elephant. Though the rider may offer small recommendations to its vehicle, ultimately the elephant decides where the duo venture. According to Haidt, we are far more likely to first make a “gut” decision and only then rationally explain to ourselves and others how we arrived at that particular decision. Our perceptions certainly play a role in decision making, but they rarely drive our final decision-making apparatus.

Additionally, our upper brain bears the responsibility for language while our limbic system wholly lacks language capabilities. Hence, as in our mission statement experiment, people often struggle when they are challenged to put their reasons, their why, into words. We cannot find some magic formula of words that will affect each person’s limbic system in the same manner. Think for a moment about a person you care for deeply; a spouse, child or friend. Now write down the reasons you have such a close feeling for them. Like most people, you probably had a difficult time articulating your reasons and, as a result, each reason leaves something to be desired. The inadequacy of words to fully express our most profound beliefs is a problem as old as time, or, I should say, as old as our brains.

Statements that describe what an institution does speak to the neocortex. It assimilates and evaluates the information as it attempts a rational decision. Why statements, however, go directly to the emotional part of our brains, our limbic system. And critically, the limbic system inescapably determines our ultimate behaviors and actions. Explaining our mission, whether institutional or personal, in terms of what we do helps people make an educated decision. But phrasing our vision as a why shapes their final actions. Returning to Haidt’s terminology, speaking directly to the elephant, symbolizing our limbic system, greatly improves the chances of our words affecting other people’s actions.

Of course, the challenges inherent in the inadequacy of language also present barriers when an institution discusses its mission. This problem presents itself in at least two ways: in its formulation and dissemination. Most schools can craft the what of their institution’s mission or vision statement with relative ease: supportive of Israel, excellence in Jewish and general studies, instilling character and community service, and so forth. But do these details, important as they may be, articulate why we are so passionate about Jewish education or why our school is special?

An informal perusal of mission statements from a variety of schools will show that some already do a good job of explaining their why, if not always with absolute clarity. Most schools arrive at their philosophy during a long period of conversation, collaboration and consultation among shareholders. In many cases, schools seem to stop short of explicitly stating why they have certain beliefs, possibly because a clear statement could actually alienate some families or individuals. The second, far more challenging, issue in articulating our mission lies in ensuring continued awareness among the staff, parents and students of our schools. Finding our why is one thing. Rallying others around it, while more difficult, is also of greater importance. School leaders bear the responsibility of ensuring each staff member understands why their school has a given mission, and teachers must constantly evaluate how they are fulfilling that mission.

Of all the shareholders in a day school, though, our students most urgently demand the clear articulation of why we commit to a specific mission. In my experience, we as teachers assume our students know or have been told so much that we rarely, if ever, take time to discuss why their studies matter.

But the stakes couldn’t be higher. Rabbi Lord Jonathan Sacks, in his response to the Pew Report, focused on our collective imperative to transmit the whys of Judaism to our children. Interestingly, children of middle school age and younger actually have greater receptiveness to why statements than their older peers. Developmentally, their limbic system plays a more prominent role in their brains’ function. Loyalties and beliefs generally “lock in” to a greater extent once they hit adolescence. Clarifying a phenomenal why-based mission, or posting it on walls, will do little if we fail to imprint our mission on the hearts and minds of our students. On the first day of school we should discuss our why with students. This initial conversation must be reinforced and continued throughout the year. However we choose to frame the discussion, we must discuss why Jewish education, and Judaism in general, should be important to them.

Successfully articulating the why behind our mission can change our schools. All parties interested in the school will attach themselves to a unified vision and work constantly in the service of that vision. Teachers and parents alike will clearly articulate why the school’s mission matters. Most importantly, students will come to see every activity in which they take part as building towards a meaningful and inspiring larger goal. We will create inspired communities, reaching beyond our physical walls and lighting the hearts and minds of the Jewish future.♦ 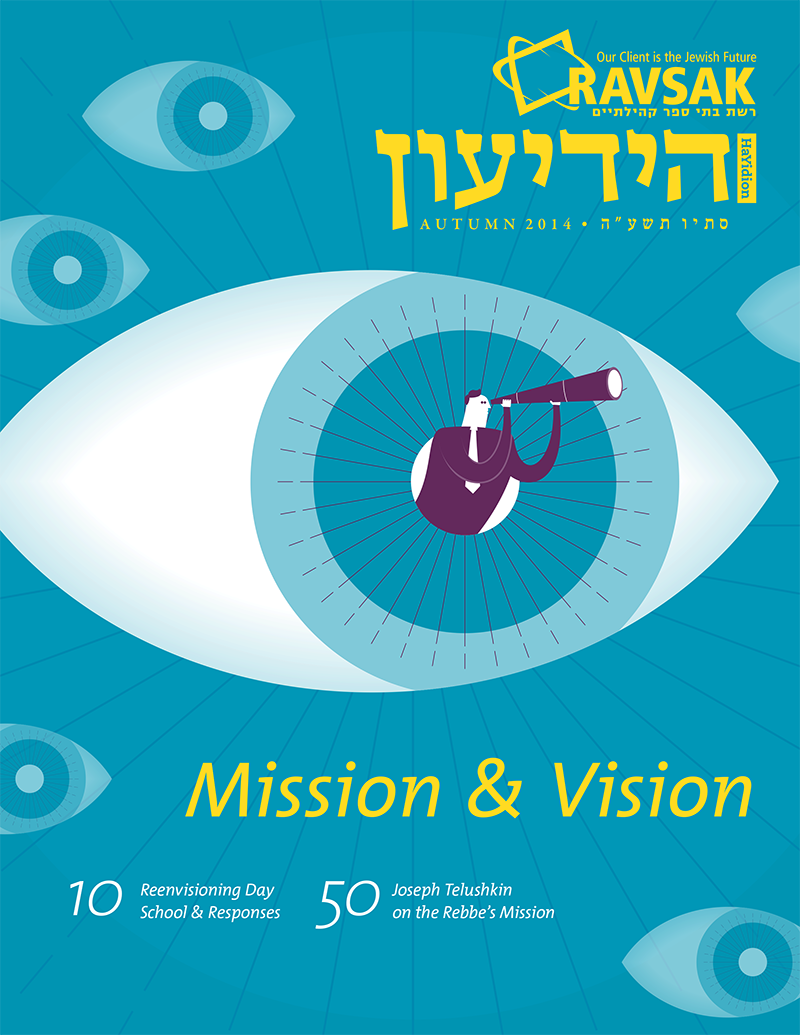