Since 2008, more than 50,000 parents, representing children in over 100 Jewish day schools, have participated in the PEJE-Measuring Success (MS) parent survey. Thousands more have provided critical feedback on their needs, priorities and perceptions through surveys designed by individual schools. The most successful Jewish day schools are able to act on three or more key themes emanating from a parent survey and see statistically significant improvement on those themes in subsequent surveys.

The themes that most consistently emerge from existing day school parents include the following: a desire to enroll their children in a school that meets their desired level of Jewishness; a requirement that schools are academically strong and prepare their children for their next academic experience; school responsiveness to parental concerns. While the weight of each of these three parental themes varies from school to school, and while other themes often come into play for an individual school, a focus on these three broad themes has been shown to increase the likelihood that these parents will recommend the school to others.

But research needs to extend beyond the pool of current parents. With many day schools facing acute enrollment challenges, and with traditional student feeder channels becoming more unpredictable due to the proliferation of stronger public schools and charter schools and better-resourced private schools, it is critical that day schools use surveys and other data collection tools to collect and analyze data from prospective parents. Toward that end, Prizmah and Measuring Success have engaged in two collaborative efforts to collect and analyze data from thousands of potential day school parents. While the findings from these non-parent surveys aren’t always consistent across different communities, it is clear that the voices of these potential parents should be heeded; both school-level and community-level recruitment/marketing efforts must be modified to address the particular needs and desires of a wider range of potential day school parents. What follows is a description of each of the two collaborations, a summary of the findings, and recommendations for next steps in data collection and analysis.

Working with four non-Orthodox day schools in the Chicago market, the Chicago Growth Program is premised on the hypothesis that day schools in the same city can increase their enrollment of non-Orthodox children and better their perception in the community by engaging in data-driven decision making. The program’s hypothesis is that data collection and analysis of prospective day school parents can help identify some of the misperceptions of and negative views toward day schools. Once these misperceptions are identified, both community-level and school-level marketing efforts can be implemented in an effort to correct these negative misperceptions.

The first stage of this program involved recruitment of Chicago schools to participate in the program. With the goal to increase numbers of non-Orthodox children in Jewish day schools in mind, invitations were extended to all Chicago-area schools, and ultimately four non-Orthodox schools enrolled. The second stage involved the surveying of hundreds of non-day school parents from the membership rolls of the Chicago JCC, individual synagogues, the PJ Library program and Chicago’s federation (JUF). The data suggests three areas in which the parents surveyed put day schools behind other schools in the Chicagoland area.

Academic excellence: Chicago’s private and more elite public schools were seen as stronger academic institutions. Teaching excellence: Teachers in Jewish day schools were seen as not as well trained or experienced. Graduate preparedness: Jewish day school graduates were perceived as not as well prepared or likely to be accepted into highly selective Chicago area high schools or premier universities.

Armed with these data, and with generous funding support from the Crown Foundation and an anonymous sponsor, Prizmah hired a prominent Chicago marketing firm (Resolute Consulting) to develop a community-wide campaign to address these three areas. The firm was also employed to work one-on-one with each school, training the school’s admissions team to target their messages more effectively by addressing misconceptions that surfaced through the survey.

Resolute advocated for the creation of a dedicated website to help “make the case” for Jewish day schools in Chicago. Visitors could link to any of the four schools through the site, too. Resolute held a video contest on the website (www.discoverjewishdayschools.com) in order to build traffic on the new site. Resolute also launched and actively managed a Facebook page for the new URL; ran radio sponsorship messages on WBEZ, the local NPR station, during recruitment season; placed full-page ads placed in the JUF News, the Midwest’s largest circulated Jewish community publication; and found other platforms to share the academic, teaching and graduate successes of the schools in the program. The marketing efforts included highlighting a variety of statistics on a number of academic factors deemed important to prospective parents. These included standardized test scores, in particular science and math; the high acceptance rate of day school graduates into Chicago’s prestigious high schools; and faculty and staff with esteemed credentials, awards and fellowships. Resolute examined the schools’ websites and placed greater emphasis on the schools’ academic strength while showcasing the success of their graduates.

Even as the communal website and individual school sites continue to emphasize the importance of Jewish values and character building in their efforts, school admissions professionals have come to appreciate the impact that a greater focus on academics can have on dispelling the misperceptions that exist among prospective parents. The program has given schools the tools to put their best foot forward by promoting their academic strength. Though outside the current parameters of the program, a follow-up survey of many of the initial survey respondents (as well as new respondents) would be helpful to determine the degree to which the community-level and school-level efforts have helped to change misperceptions and increase the likelihood of prospective parents to enroll their children in a Chicago day school.

With generous funding provided by AVI CHAI, Bechirah Elyona involved 12 Jewish high schools across 10 communities. The program bore certain resemblances to the Chicago program, though it specifically targeted full-pay families in an effort to help schools recruit families whose tuition levels would allow schools to invest in quality improvements. Surveys were once again conducted in conjunction with local JCCs, synagogues and other Jewish institutions. One positive by-product of this research effort is that it resulted in larger-scale community advocating. Schools had obvious reasons for participating in the project, but the JCCs and synagogues less so. Yet these organizations came to understand that their willingness to disseminate the survey to their members would enable them to gain valuable insight on the educational priorities of their members. In some cases, the partnerships rekindled dormant relationships and enabled the community organizations to become stronger advocates for Jewish day school education.

The survey results foregrounded some similar considerations among parents of high school-aged children across the 12 participating schools. While prospective full-pay high school families generally value schools with strong academics, they also look for a high school that is strong in character development. The Bechirah findings showed that prospective full-pay families also perceive Jewish high school to be stronger in the area of character development than its local competition, giving schools a sense of what they “do” that currently has high value and high perception. An additional finding that could be a strong selling point for day schools is that affinity is an important factor in high school selection; parents want their children to attend the same schools as their friends and acquaintances. Among negative findings, however, secular academics is typically perceived as weaker than the competition. The survey also found a widespread perception that Jewish high schools are weaker in the credentials of their faculty and the innovative quality of their curricula.

In addition to providing the 12 high schools with the names and emails of the survey respondents for follow-up, the data, nuanced though it may be, should enable these schools to adjust their programming, marketing and/or messaging based on the unique desires and values of these families. Some of the schools may focus more on academics, including a greater emphasis on positive alumni outcomes, while others may focus on the profile and values of families attending their school. Nearly all have or will develop parent ambassador programs. Others are considering ways to partner with local independent schools so that additional course offerings can be made available to their students, with the added bonus of enhancing their secular academics.

While the process may be time-consuming (and costly), it is critical that day schools collect and analyze survey data from potential parents. Understanding the needs, wants and desires of these potential parents can help schools dramatically expand the funnel of families considering their schools. While certain findings are consistent across most communities and others may vary considerably from school to school and community to community, an understanding of the top few factors that drive parental perceptions is a critical first step to creating customized and targeted marketing and messaging to a wider variety of parents. 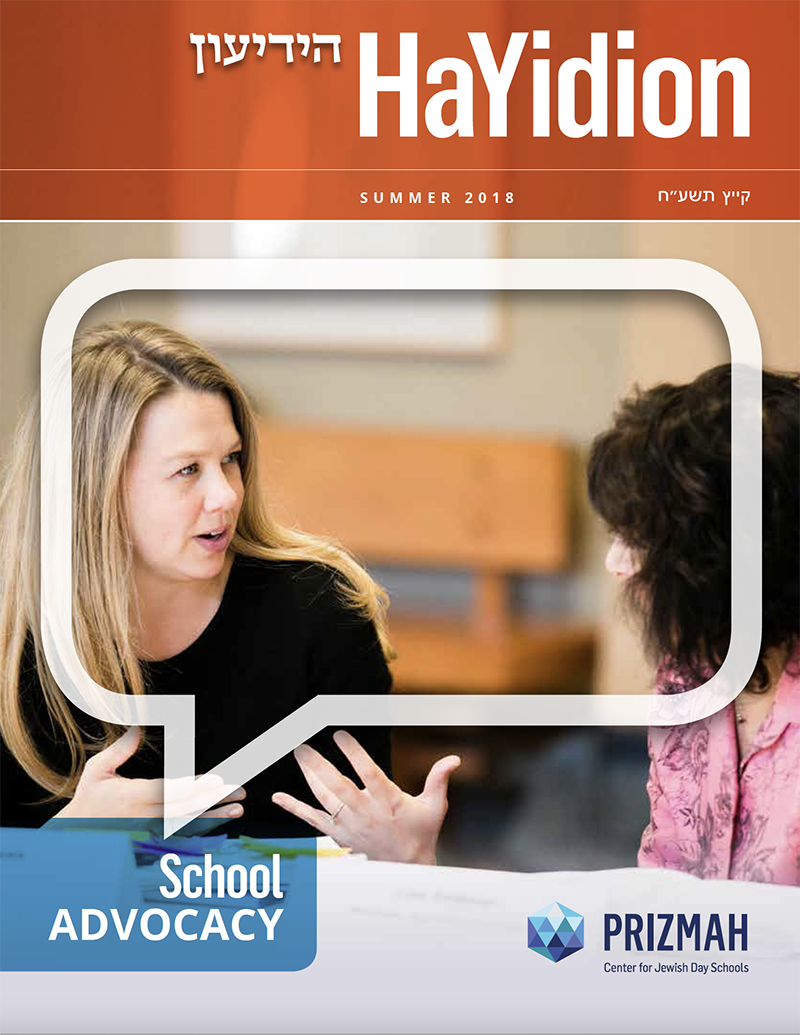